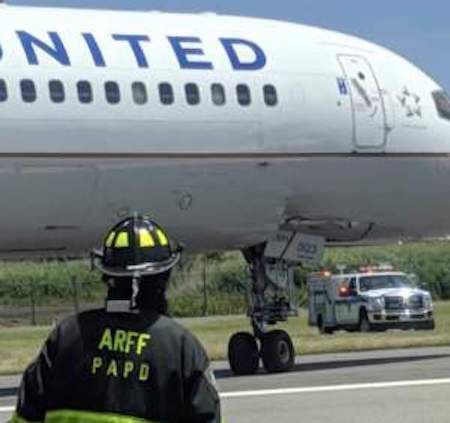 The runway incident that briefly closed Newark Liberty Airport is now being termed a hard landing that may have written off the United Boeing 757-200 involved. The aircraft was on a flight from Denver with 166 people on board when it bounced on landing and porpoised, coming down hard on the nosegear, according to the Aviation Herald. The nosegear was partially pushed into the cabin. The aircraft came to rest with the gear still on pavement on the left side of Runway 22L and did not “skid” off the runway as was initially reported. At least four tires on the mains were flattened but the two on the heavily damaged nosegear held.

The wind was right on the nose at 15 knots gusting to 22 at the time of the incident at 12:56 p.m. local time. The passengers and crew got off the plane using stairs and were bussed to the terminal. The airport reopened quickly but more than 100 flights were either delayed or cancelled because of the incident. United has not commented on the mishap. The 757 was formerly operated by Continental before the two airlines merged under United’s name.