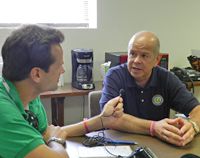 Amidst the tension of the economic discussions in Washington on New Year’s Day, the Senate was busy confirming the nominations of political appointees and Michael Huerta was one of them. Huerta, who has held the post of acting administrator since former Administrator Randy Babbitt stepped down more than a year ago, was among dozens of nominations approved as part of the session ending package. Huerta will be playing catch-up on a number of fronts as the agency deals with a major modernization push in the face of tighter budgets and a rough economy. In a podcast interview at AirVenture 2012, a cordial but non-committal Huerta admitted as much.

The General Aviation Manufacturers Association reacted positively to the news. “We look forward to continuing our work with him on such critical issues as improving certification processes and practices globally, advancing NextGen … ” GAMA said in a news release. The National Air Traffic Controllers Association cheered the news. We thank the Senate for working to confirm Mr. Huerta. He has demonstrated strong leadership and sharp focus in collaborating with air traffic controllers and all aviation safety professionals to improve the safety of U.S. aviation, said NATCA President Paul Rinaldi. Huerta was widely endorsed for the job when he was nominated last spring but politics got in the way. Sen. Jim DeMint, R-S.C., vigorously fought the appointment to delay it until after the November election to allow Republican candidate Mitt Romney a chance to nominate his own choice if he had won. DeMint resigned his Senate seat after the election and without his opposition the appointment passed.