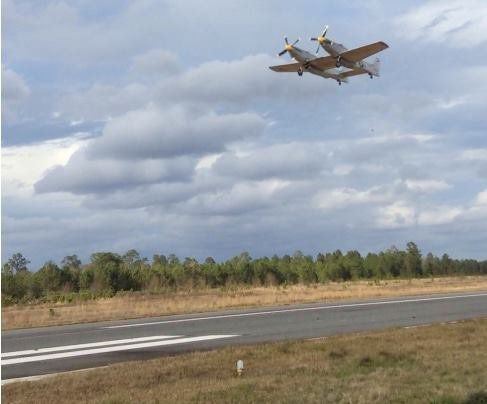 A meticulously rebuilt prototype of the P-82 Twin Mustang, designated the XP-82, became the only flying version of the type on New Year’s Eve but it wasn’t supposed to work out that way. Test pilot Ray Fowler was conducting the latest of a series of high-speed taxi tests at the XP-82 Prototype Project’s home base in Douglas, Georgia, on Monday and the intention was to lift the wheels for a second or two and then deploy the flaps and roll out. “It accelerated so fast after the planned lift off that Ray, our test pilot, realized that getting it back down and stopping it in the remaining runway would be marginal,” owner Tom Reilly said in Facebook post. “So he pushed the power back up and flew for about five minutes.”

The short first flight included at least one low pass and gave Fowler enough data to report the aircraft flies well. “The very short gear-down flight showed zero airframe squawks, hands-off no trim required, with all engine temps and pressures normal. This wonderful test flight came after a 10.5 year restoration encompassing 207,000 labor hours,” Reilly said in the post. The project team had hoped to fly the spirited twin to AirVenture 2018 but ran into some technical hitches. It hasn’t been announced whether it will be flown to Oshkosh in 2019. The fuselage of the aircraft was obtained from Walter Soplata, a warbird parts supplier in Ohio. Numerous authentic parts were acquired from all over the world by the time the aircraft was airworthy.

First flight was supposed to be a private event but the power of the Korean War fighter took Fowler by surprise. “The unexpected and dramatic acceleration of our XP-82 at 55 inches of manifold pressure occurred because it was approaching three times the horsepower of a single engine Mustang and one and a half times the weight,” Reilly said. The project team has to fly off 15 hours to get the one-of-a-kind warbird’s FAA approval and anyone in the area is welcome to come and watch. We couldn’t find any video of the first flight but here’s a little Merlin music.