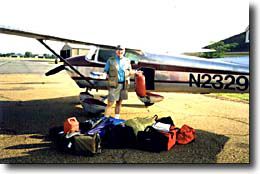 There wasn’t enough time to prepare, but it didn’t matter. I was going to make the trip to Oshkosh, no matter what. Business and family demands created the near-impossible situation where I had a half-day to gather camping gear, aviation gear, food, and then to pack it all in a way that would fit in the old Skylane. None of that mattered, though. I was going to my first Oshkosh!

Sure, the EAA this year has dubbed the monster fly-in "AirVenture," but few are yet calling it that. It’s simply "Oshkosh." That’s all I had to say to fellow pilots, and for two months I’ve been saying it to everyone who would hold still.

"I’m going to Oshkosh," I would announce. Reactions varied. Veterans offered advice – lots of advice. Those who have never been had an almost universal response, usually voiced as "You lucky SOB!" It was the perfect answer, in my opinion, because I do consider myself a lucky SOB just to be able to make the pilgrimage.

I had only five days available for OSH, beginning two days before the event actually started. In on Monday, and leave on Friday to make a work-related meeting in Nashville. Perfect. Go in early, beat the crowds, get two full days of the Oshkosh experience, and zip out Friday morning before the real crush.

Dawn broke Monday morning, lacking only the soundtrack from Patton to set the mood for "the mission." Coleman stove, two plastic boxes with cooking utensils, duffle bags, tent, sleeping bag, and then there were the extra three bags of equipment needed to do a live radio show once I got to Nashville after OSH. Do they rent U-Haul trailers with wings? How will I ever get all this stuff in the plane, much less have room to pick up Jerry and his gear in Missouri?

Not to worry. The 1959 Cessna Skylane swallowed my equipment and practically taunted, "Is that the best you can do?" N2329G sports a straight tail (the swept tail appeared the next year), giving it a distinctly "classic" look. We went through my instrument training together, finishing up last January, which proved useful on the trip from Louisiana to OSH. 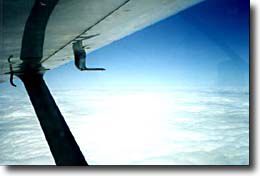 The Weather Channel showed a stationary front sitting atop Missouri, and DUATS reported the ceiling in Columbia as 100 feet. Well, nothing to do but blast off and see if conditions improve before I get there. From home base in Natchitoches, Louisiana, north to ELD, to Hot Springs, then straight north to Harrison, Arkansas. Off IER at 9:15 am local, call Deridder FSS to open the VFR flight plan, call Ft. Polk Approach for flight following, fire up the Garmin GPS195, light up the Loran, tune in the nav radios, and climb to 4500. Smooth, but hazy. Climb to 6500, still hazy, but cooler. Check with FSS on weather. Harrison (KHRO) is reporting IFR, Columbia still shows 100 foot ceilings. It’s three plus thirty to Columbia, so there’s time for conditions to improve. I’m having a ball. A 400-hour pilot, flying his own plane (don’t tell the banker I said so), on his first trip to Oshkosh. What could be better?

First indication that a change in plans might be necessary showed up on the GPS and Loran — ground speed of 115 rather than 130 knots. Hmmmm. Check the Garmin, and it’s showing arrival at Columbia after 3:45 flight time. Hmmmm. I could file IFR and go in, but there would be no fuel options when I got there. It was time to buy some time and options. Harrison was reporting few clouds at 800 as I cleared the southern reaches of the Ozark Mountains. Call KHRO unicom for airport and traffic advisories, but there’s no answer. I call my position and intentions on CTAF frequency and head to the airport. 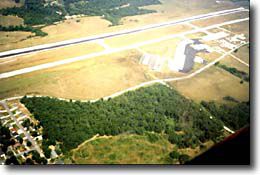 What’s this? Oh yeah. I had been to this airport two months ago, and the guy at the FBO mentioned they would be tearing up the runway soon. So THAT’S why there are big X’s on each end of 18-36. Hmmmm. I didn’t see that on the NOTAMS from DUAT. I guess that’s why a real, live briefer is almost always better.

I check the Flight Guide for the frequency for FSS, call ’em up, and ask the status of KHRO. It’s open, but landing is on the taxiway, which is 2900 feet.

I circle the field. Voice on the radio calls "Aircraft in the pattern at Harrison, do you intent to land?"

Contact! Someone is down there. I taxi up to the credit card automatic fuel pump, nose-to-nose with a beautiful Piper Tri-Pacer. Into the FBO to check weather. The Tri-Pacer pilot has been there for a couple of hours, trying to go north to Oshkosh. He is VFR only, and the 200-mile wide band of clouds over Missouri had stopped him.

Columbia now is reporting 500 broken, 1000 overcast. Tops are 3000 to 4000. I’m not about to tackle minimum conditions with a brand-new instrument rating, but breaking out at 1000 and passing through a few clouds down to 500 is something I can do. I file to Columbia. Jerry’s waiting. I’m going to be late. Welcome to the world of small planes.

The Tri-Pacer pilot takes off ahead of me, planning to skirt the clouds by cheating to the west, where conditions are improving. I climb to 6000 in the clear. About Springfield the clouds below me combine to form a solid layer. Mizzou Approach vectors me to intercept the localizer for runway 2 30 miles south. Down to 4000. Check to make sure everything is set up. Cleared for the approach. Into the clouds at 3000, four minutes of water running off the wind screen, then breakout at 1000 and land. 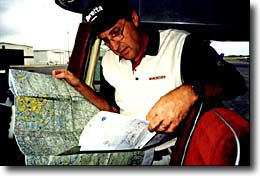 Grab lunch with my buddy Jerry Foust, throw his gear into the plane, file for an IFR clearance to VFR on top, and fire up the big Continental. Jerry is about to finish his instrument training in a Piper Warrior, and he’s anticipating a long takeoff run with the plane loaded to gross weight. I yank the big handle to put in 20 degrees of flaps, and liftoff comes at 70 mph about 1000 later. Climb is 100 mph and 1000 fpm. Jerry can’t believe it.

We break out on top at 3000, cancel IFR when we reach 4000, punch in direct OSH on my GPS, Jerry’s GPS, and the Loran. Three hours en route, they all agree. Kansas City Center provides flight following. The undercast clears within 70 miles. Boy, am I glad I got that instrument ticket.

Over Quincy, Illinois, on the Mississippi River. Clouds ahead."Hey Jerry," I say. "Take you head out of that Oshkosh NOTAM and tell me if you think we’ll clear those clouds." 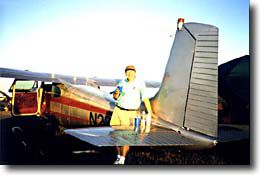 Me neither. From 7500 we go to 9500, which provides more than 1000 foot clearance. FSS reports Oshkosh is clear, so we continue. KC Center ends flight following, and adds that Chicago Center is not accepting VFR flight following. No problem. We’re on our own.

Call Madison Approach for passage through their airspace, descend to 3000, start figuring out how to find Ripon, the first point in the OSH arrival procedure. Looks like it should be between those two lakes. Okay, follow that railroad track into town. Looking for planes. We’ve seen a couple, but not many. Over Ripon, follow the tracks to Fisk. Hey, there’s the strobe they said would be next to the trailer. Watch for planes. I see the blue tower — just like it looked in the video tape from EAA. Look for planes. Rock the wings. We’re behind an orange Cub. Slow it down. I guess he can’t do 90 knots. Look for planes. Jerry’s calling out any plane he sees. Tight right pattern for 27. The controller calls my turn to base, then says fly straight to the threshold, land on the orange dot (the first one). At 100 feet AGL, the controller says for the Cessna (that’s us) to NOT land on the orange dot, but continue to the green dot another 1500 feet. No problem. Add power, fly the runway at 50 feet. Cut power, drop it 100 feet past the dot, slow it down, get off on the grass to the left. 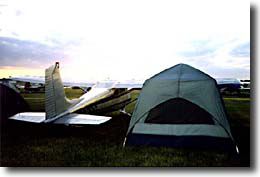 Whew! We made it. We are at Oshkosh. Put the sign in the window and follow the taxi directions from the parking attendants. Fellow AVweb contributor Brent Blue has reserved several parking/camping spots and has marked the row with a string of rubber chickens hanging from a tall pole. We find the flock, pull into a space, shut it down, and are immediately welcomed by several people at the door of the plane.

We are here. Good grief! Look at all these planes. And we arrived early!? What’s it going to be like on Wednesday?

Set up the tents, break out the camp chairs, toast our first Oshkosh arrival, and get ready for a week of new and wonderful experiences.