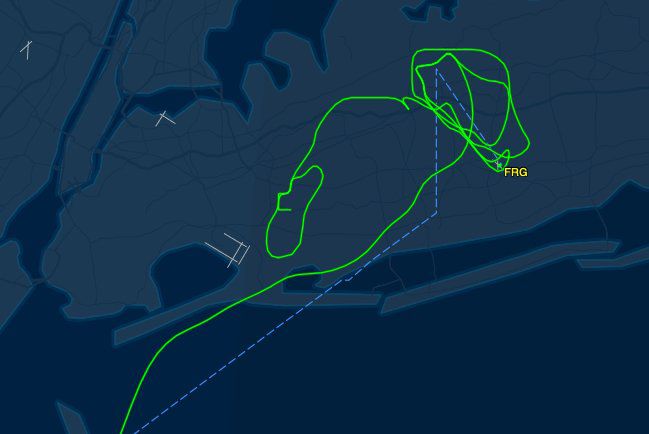 Three occupants survived the crash of a Cessna 172 into a Long Island suburb Sunday night, according to reports in the New York Post. The 1977 Cessna 172N was on a flight from Niagara Falls, New York, to Republic Airport in Farmingdale, New York. According to FlightAware.com, the Cessna took off at 5:12 p.m. and was flight-planned to land at FRG by 8:30.

According to reports, the aircraft was rented from a flight school at FRG by Dongl Kim, 27. Kim was returning to Republic but could not land in the fog. “They attempted to land at Republic Airport, they missed the runway four times, they were redirected into Kennedy, they missed the runway twice at Kennedy—as they came around, they ran out of fuel,” police commissioner Patrick Ryder said.

The FlightAware track suggests the ill-fated 172 made three attempts at the Republic ILS RWY 14 approach before being sent westward to try again at JFK. The Cessna appears to have attempted one approach and then ran out of fuel on the second attempt at Kennedy. It had been airborne for a bit more than five hours.

Weather at Republic around the time of the approaches was 1/4-mile visibility in fog, ceiling variable at 200 feet. Kennedy wasn’t much better, and two airports to the east, Islip and Brookhaven, were both fogbound. The Cessna came down on Clarenden Drive in densely populated Valley Stream, New York, just 3 SM from JFK. No one on the ground was hurt and, as expected, there was no post-crash fire.