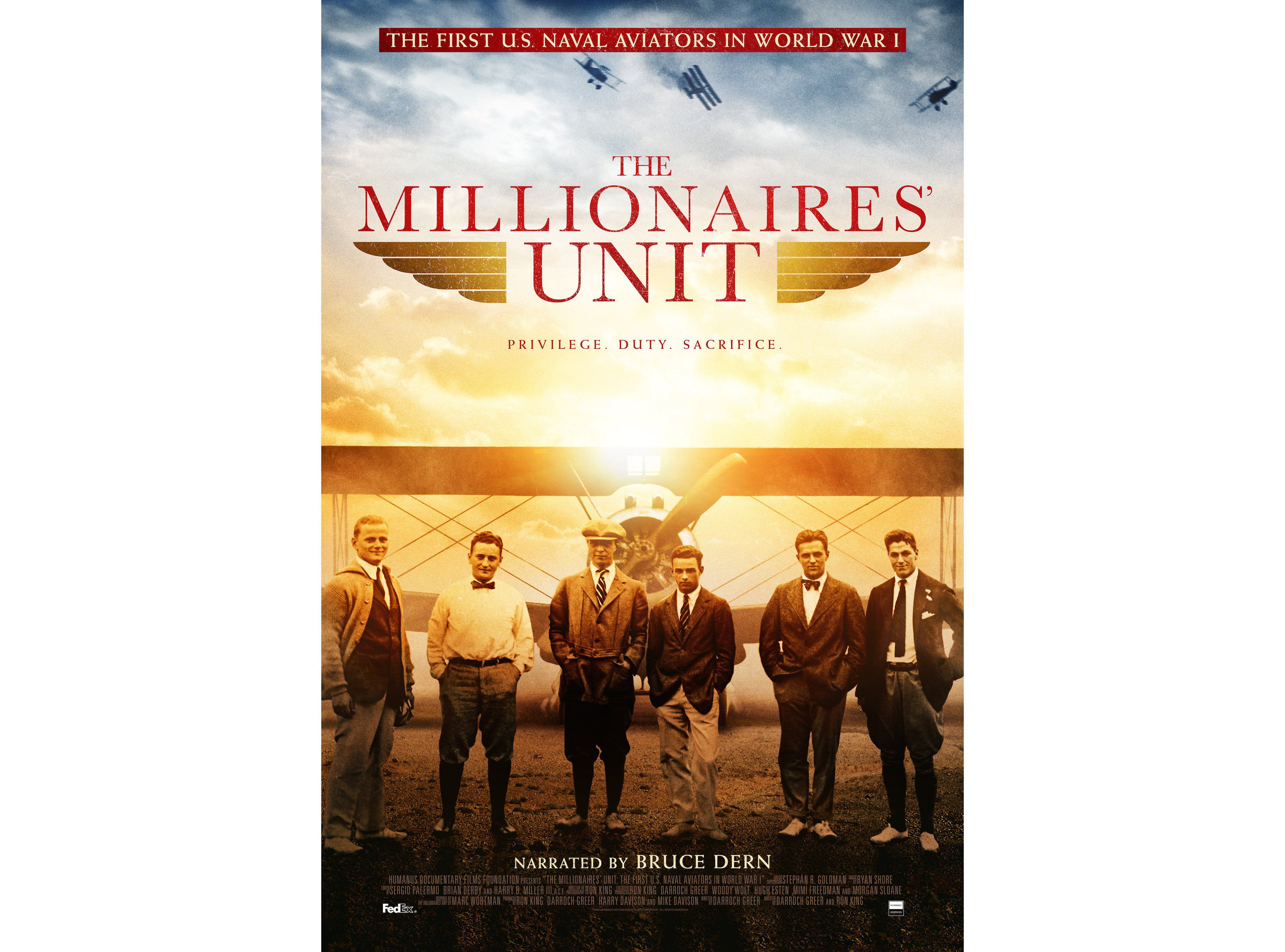 Aviation, at least in terms of controlled, heavier-than-air flight, does not have a terribly long history as these things go. In spite of its relative youth, that history is full of stories worth remembering; stories that brought us to where we are today and continue to provide valuable lessons, insight and inspiration for current and future aviators. One of the organizations working to preserve these stories is the Humanus Documentary Films Foundation, which recently premiered the museum cut of their World War I aviation film, The Millionaires’ Unit, at the New-York Historical Society in New York City.

Based on Marc Wortman’s book of the same name, The Millionaires’ Unit tells the story of a group of Yale undergraduates who formed a privately funded air militia in preparation for WWI, joined the United States Navy, and became, in many ways, the foundation of U.S. naval aviation. The documentary follows the First Yale Unit, known in the press as the Millionaires’ Unit, from how they came together to learn to fly in a Curtis Model F flying boat, through their efforts during the war, and on to the significant impact many of them had on the early days of aviation. Many went on to take leadership roles that influenced the course of American history.

“I wrote about the young men of the First Yale Unit because I was swept up by their idealism, passion for this new frontier of aviation, and the untold stories of their risk-filled, sometimes humorous, sometimes heroic, sometimes deadly adventures,” said Wortman. “They came from such a different age and had such different expectations for themselves than most of today’s privileged youth. I wanted to understand better the sources of their sense of duty.”

The story of making The Millionaires’ Unit into a documentary began with a chance encounter in a bookstore. According to filmmaker Ron King, “I walked over to this new stack of books and noticed that … there was a picture of my grandfather on the cover of the book that I had never seen before, but I recognized him right away. My mother had told me that my grandfather had flown in World War I and was one of the first U.S. naval aviators, but … I didn’t know what the story was about his service in World War I.” King contacted Wortman and, upon discovering that no one had yet looked into putting the story on screen, got in touch with college friend and professional documentarian Darroch Greer. Together, they decided to put together a film.

In spite of having almost no funding, the project began to take shape. In addition to research already compiled for the book, they uncovered information about the unit and its involvement in the war through public and private archives. Furthermore, King wasn’t the only descendent of the First Yale Unit pilots to get involved with the project. Film narrator Bruce Dern’s great-uncle was also a member. Other families, some of whom were in contact with Wortman for his book, and others who found the documentary project along the way, provided a wealth of letters, sketches, documents and remembrances. Greer and King say they are still being contacted by relatives of First Yale Unit pilots.

Documentary funding came through donations. Using small crews and filming piece by piece as money became available, Greer and King were able to stretch their resources even as the film’s scope expanded beyond their original plan. The Humanus Documentary Films Foundation was formed up to support the fundraising efforts for The Millionaires’ Unit. All told, the two-hour version of the documentary was seven years in the making and cost approximately $1 million.

Sights and Sounds Of Historic Flight

Greer and King didn’t want to use actors to re-create the lives of the unit pilots. Instead, they let the letters, diaries and photographs from the time speak for themselves. Similarly, when filming aircraft for the documentary, they traveled around the world to film restored or replica planes that were as close to those flown by the men of the Millionaires’ Unit as possible. Significantly, the filmmakers found a flying full-scale replica of a Curtiss Model E flying boat at the Curtiss Museum of Local History at the south end of Lake Keuka where Curtiss developed the original seaplane. The airplane was built and flown by local volunteers led by engineer/craftsman Art Wilder.

Realizing that aesthetic also included a trip down to New Zealand to get aerial footage of one of the very few Sopwith Camels still flying powered by an original engine. “It’s a rotary engine with nine cylinders that barks and bangs and sounds very distinctive,” said Greer. “I really fell in love with this plane.” Other aircraft that appear in the documentary came from The Aeroplane Collection (Paso Robles, California), and The Old Rhinebeck Aerodrome (Rhinebeck, New York).

Even after the initial release of the film in 2014, the project has continued to evolve. The museum cut of The Millionaires’ Unit premiered this April, condensing the two-hour documentary into a one-hour version meant for museum shows and television. Humanus also maintains an online archive of historic material related to the unit including additional information about unit members, an illustrated timeline of the unit’s foundation and service, and a photo gallery.

Humanus is currently working on a second aviation documentary that follows the Lafayette Escadrille, a group of mostly American volunteer pilots who fought for France in WWI. A 20-minute version of The Lafayette Escadrille documentary was produced for the WWI Centennial Commission education initiative and is scheduled to be distributed to approximately 600,000 classrooms. A longer version, slated to run about an hour and a half, is in production.

To learn more about the Millionaires’ Unit, the making of the documentary and other aviation projects from the Humanus Documentary Films Foundation, listen to our podcast or visit http://millionairesunit.org and http://humanusdocumentaryfilms.org. The two-hour version of The Millionaires’ Unit can be streamed via Amazon, iTunes, Google Play and more.