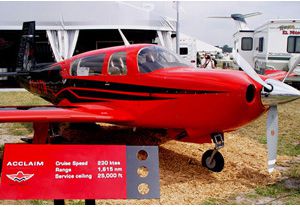 Mooney is now formally laying claim to the title of “fastest piston single” with the final certification of its Acclaim speedster. The aircraft, which was introduced at Sun ‘n Fun last April, sports twin intercooled turbochargers on its 280-hp TSIO-550-G Continental engine. The airplane is said to hit 237 ktas while cruising at its 25,000-foot service ceiling. Next fastest is the Columbia 400, which is marginally slower (two knots so) with a similar engine (it’s a C model rather than a G). The Columbia model previously held the “fastest” title for several years. “With the certification of the Acclaim, the debate is over,” said Mooney Vice President of Sales and Marketing David Copeland. “Now theres no question which single engine piston airplane can claim the title as the fastest since the Acclaim clearly boasts the highest maximum cruise speed and it is now officially ‘in service.'” Mooney says the Acclaim will hold 200 ktas at 10,000 feet and go as far as 1,600 nm with optional long-range tanks (assuming the occupants are similarly equipped) at 200 knots. It comes with a G1000 package and is also available with a factory-certified system for flight into known icing. Mooney says there is a “significant” order backlog for the Acclaim, and production is gearing up to fill them. The Acclaim replaces the Bravo in the Mooney lineup, which also includes the updated and speedier Ovation 3 introduced last summer.