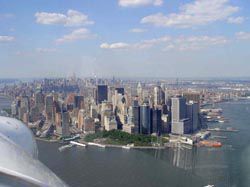 Pilots who’ve done it say there’s no better way to see New York City but a local senator wants to close the so-called Hudson River Corridor to GA. Sen. Charles Schumer (D-N.Y.) claims New York City is being shortchanged on security by the existence of the uncontrolled VFR corridor and he believes the Big Apple deserves the same sort of GA ban that Washington, D.C., has. “If they can do it for Washington, they can do it for New York,” he told a news conference. Now, we’re not sure if Schumer is envious of the 15-nm no-fly zone in Washington or the Air Defense Identification Zone (neither of which has bagged a single criminally minded pilot to date) but he’s particularly upset with the Hudson River Corridor (which he calls the Hudson River Approach). The corridor is open to uncontrolled traffic below 1,200 feet and takes pilots past the heart of New York City (and under some of the busiest IFR airspace anywhere). Schumer says there’s nothing to stop a pilot using the corridor from taking a short detour and wreaking havoc on the Statue of Liberty or other vulnerable landmarks. What he didn’t mention is that there’s also nothing to stop the pilot of an airliner from doing the same thing. In any case, the FAA is closing the corridor as part of its security clampdown during the Republican National Convention next month and Schumer doesn’t want it to reopen. In addition to holding a news conference, Schumer has also sent letters to the FAA and Transportation Security Administration.