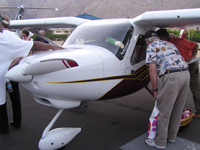 The third annual U.S. Sport Aviation Expo will take place next week in Sebring, Fla., from Jan. 11 to 14. The user-friendly event has been growing every year, and this time will host about 70 outdoor booths and another 50 or so exhibitors in tents. “We’ll have a number of new aircraft to show this year,” event chairman Bob Wood told AVweb on Tuesday. “The Cessna LSA [light-sport aircraft] prototype will be here flying,” he said, providing the first public showcase flights of the new aircraft. Cessna confirmed that it will bring its prototype LSA to the event, but the airplane will not be available for visitors to try out unlike most aircraft at the show. “Maule also will be bringing a new LSA that hasn’t been seen before, and IndUS will show its new Thorpedo LP model,” Wood said.