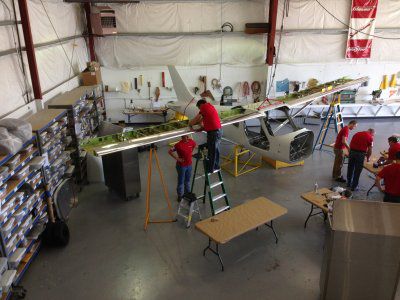 Students at 27 high schools from 22 states competed for the chance to build two Glasair Sportsman aircraft that were finished and on display at AirVenture Oshkosh. The effort involved aviation industry leaders organized under GAMA. Students interested in the program competed by using a derivative of X-plane flight simulator software to design and build a virtual aircraft that were reviewed and the best two designs were chosen. Lycoming’s Michael Kraft, who saw the submissions, said they were innovative and very good at addressing design goals, even if some were extremely unorthodox or even scary from an engineering perspective.

Two schools were chosen as winners and were allowed to select four students each to travel to Washington and participate in Glasair’s Two Weeks To Taxi program with mentors from their school and the manufacturer. Each group completed an aircraft and each student was provided an opportunity to fly in one of the aircraft. According to Lynn Freeman, the students who participated in the program came out of the experience with a new enthusiasm for flight and the aviation industry.