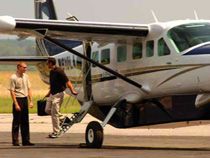 A “strategic agreement” between Cessna and the China Aviation Industry General Aircraft Company Ltd. (CAIGA) will see Caravans completed in China for sale to the Chinese market, Cessna announced Thursday. Cessna says the agreement advances a framework set in March that opens markets to the manufacturer that otherwise would remain out of reach. Under the agreement, Cessna Caravans will be built in Kansas and sent to Shijiazhuang, China, for final assembly and sale in China. Cessna expects China “to be one of the largest general aviation markets in ten year’s time,” and that “the versatility of the Caravan makes it a great fit” for the Chinese market.

According to Cessna, CAIGA “has demonstrated great capabilities with general aviation production, and this made the choice of the Shijiazhuang facility a simple one.” Cessna hopes the Caravan will cater to commuter fleets, tourist operations and sightseeing businesses in China. CAIGA’s parent company is AVIC, which signed a deal with Cessna in March. CAIGA’s facility will conduct finally assembly, painting, testing, interior installation, customization, flight testing and delivery for in-country customers. The relationship between CAIGA and Cessna is meant to create the foundation of a larger venture that will include not just final assembly but also “sales and customer support for the Caravan in China, for the Chinese market.”