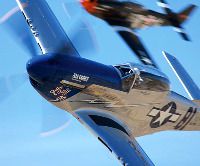 The Reno Air Racing Association announced Wednesday that it is enlisting safety experts and will formulate new procedures to guide an event this Sept. 12-16 that is yet to be called an air race. The group is still waiting for various approvals and permits from the FAA and Reno-Tahoe Airport Authority following the fatal crash of a modified P-51 Mustang, Galloping Ghost, at the Air Races, on Sept. 16 last year. Without racing permits, the association still plans to hold an event but, according to association president Mike Houghton, if racing is not allowed, the 2012 event will be the last. The usual permits aren’t the only hurdle.

On Jan. 10, the NTSB will hold a hearing that will put airshow and air race safety under the microscope. The Reno Air Races have seen twenty pilots killed since they began 47 years ago. In 2011, Galloping Ghost’s violent crash during the races killed 11 people, including pilot Jimmy Leeward, and injured more than 70 on the ground. According to Houghton, some amount of attendees (that did not exceed 20 percent) requested refunds after the deadly crash closed last year’s races early. And the accident put the Reno Air Races under a critical spotlight and brought at least one multimillion-dollar lawsuit. This year, whatever activities are included in the event, one will be a memorial. That memorial “needs to be done right,” says Houghton. Houghton’s safety panel, which includes former NTSB chairman Jim Hall, will have 90 days to present its findings to the racing association.