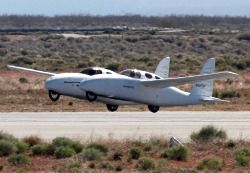 Over the weekend, Scaled Composites unveiled to the press Burt Rutan’s version of a “roadable aircraft,” the last design he completed for the company he founded before he retired earlier this year. The two-seat hybrid-electric BiPod hasn’t flown, but it has completed some “test hops” on the runway at Mojave, powered by its driving wheels. The aircraft is designed to have four propellers, two on the wings and two on the horizontal stabilizer, which haven’t yet been installed. The wings come off and can be stowed between the pods. The left pod has driving controls and the right one has flight controls.

The BiPod is designed to be powered by two gasoline engines similar to those in the Chevrolet Volt, which would power electric generators to drive four 15-kilowatt motors for the four props (only two motors would be needed to drive the wheels in ground mode). Lithium batteries in the nose, which are recharged in flight, provide reserve power. On the ground, the vehicle could cover an estimated 800 miles on 18 gallons of gas (44 mpg) or travel up to 35 miles purely on electric power. In the air, the BiPod is designed to travel up to 530 miles at 200 mph. Scaled said work on the BiPod intensified as Rutan’s retirement date neared. The four-month project was valued as a last chance for young engineers at the company to work with the legendary designer before his departure. Scaled is reportedly not interested in completing the prototype, but is shopping around for interest from any partners. “We’re open as to what the options might be,” said Scaled president Doug Shane. EAA said the aircraft is not scheduled to appear at EAA AirVenture next week; however, since Rutan has always unveiled new designs at Oshkosh, they wouldn’t rule it out.