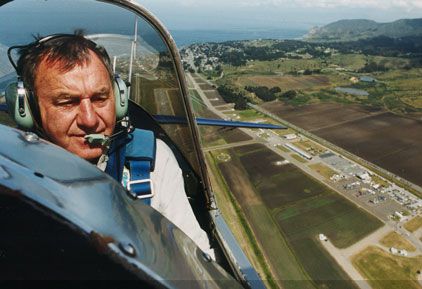 The family of an airshow pilot who burned to death in an accident at Travis Air Force Base in California in May is suing the federal government for $20 million claiming the emergency response to the accident resulted in his death. Eddie Andreini was doing an inverted pass down the flightline when his Stearman hit the ground and slid for a few hundred yards before stopping. Andreini’s Stearman was modified and had a canopy. According to the Sacramento Bee, Andreini made radio calls after the crash saying he was OK but unable to get out of the aircraft. The Bee says Air Force officials declined to comment. The video below (disturbing to watch) shows it takes a little more than a minute for fire to spread from the right lower wing to the cockpit area and that’s the crux of the family’s case. The family’s lawyer, Mike Danko, told the Bee that Air Force regulations stipulate a crash response time of 60 seconds and it took about four minutes for fire trucks to arrive. After about two minutes, a few men tried to control the fire with fire extinguishers but after they were spent they couldn’t do anything but walk away from the burning wreck.

Danko says the family claims the response by emergency crews directly caused Andreini’s death.Had the fire trucks responded as they were supposed to Eddie would be alive today, Danko wrote in a statement released to the Bee.Mr. Andreini died as a result of the rescue and firefighting services failure to extinguish the fire and rescue Mr. Andreini from the aircraft in a timely or reasonable manner, stated the claim submitted to Travis Air Force Base. The statements come from wrongful death claims that are the precursor to a lawsuit. None of the allegations have been proven in court.