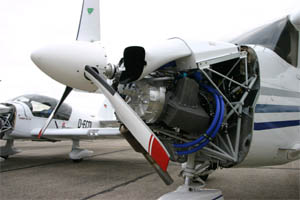 Even if youre still not convinced that diesels are the piston engine of the future for light aircraft, enough people apparently are that you might want to consider adding Thielert to your stock portfolio. The company recorded an impressive 60-percent increase in sales in the first quarter over the same period last year, and thats getting some attention in the financial journals in Europe. Of their total revenue of about $32 million in the quarter, about $19 million came from sales of its two and four-liter diesel aircraft engines and the rest came from its technology and prototyping division. Thielert also owns Superior Air Parts, which makes certified and experimental engines based on Lycoming designs. The original 1.7-liter Thielert and its two-liter successor are available as original equipment in Diamond DA40 singles and the DA42 Twin Star, and the four-liter is expected to be offered in the new five-place DA50 Super Star. The company is clearly eyeing up Cessna and Cirrus to consider diesels in its aircraft by getting supplemental type certification for the four-liter diesel powerplant in the 206 and SR22. “In both cases, certification plays an important role in stepping up business relations with the two biggest aircraft manufacturers worldwide,” company CEO Frank Thielert said.