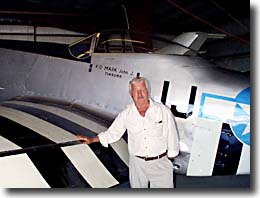 Jack Mark remembers the hot summer days when he was a kid in theworking class neighborhoods on the south side of Milwaukee. The depression of the 30’s was in full swing; hand-me-down shoes were a way of life, flying was something limited to the super-wealthy, and an afternoon at a city park was considered a summer vacation. When he got a little older, his Uncle Sugar taught Jack how to fly and sent him off to two wars to prove it.

Since then, life has been good to Jack Mark. He ended a long and successful business career in good health with a collection of flying toys any pilot would covet. Today he’s giving something back–he’s giving 140 5th, 6th, 7th and 8th grade boys and girls from his old neighborhood on the south side of Milwaukee a special day at EAA AirVenture Oshkosh ’98. The kids boarded buses in Milwaukee Wednesday morning for the big trip.

They spent the morning touring the EAA museum accompanied byguides trained to cater to the typical short attention span of pre-teens. Afterwards, they took a quick bus ride across the field to Jack’s hangar for hot dogs and Cokes and a special AirVenture greeting from former EAA President Paul Poberezny. After lunch came the Warbird grounds, then back to Jack’s for ice cream, cake, souvenirs, a close-up view of incredible aerobatic performances and then back to Milwaukee to share the day with their parents.

In addition to the display and aerobatic airplanes, the kids took home memories of Jack’s pristine P-51, two King Air 300’s, an F-86, a Fouga Fighter, an F-4, a Chinese MiG, a Grumman Mallard, Goose, and Widgeon, two DeHavilland Beavers, and a Cessna 172. Feel covetous yet? 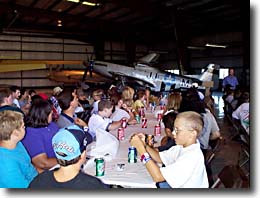 Paul Poberezny and Jack Mark grew up together in south Milwaukee, although they didn’t meet until they flew together during the Korean War. These days they’re neighbors in Oshkosh. They’ve never lived more than three blocks apart in over 70 years. Jack gave Paul moral support and advice and helped EAA in the early days, when EAA operated out of a small building in Hales Corners. Jack served a few terms as EAA Director, so he is no stranger to the Young Eagles program. These kids are not quite old enough for Young Eagles, and there is no Young Eaglets program…yet. (Just give Paul’s son Tom some time.)

This is the second year for the event. Both the current and former mayors of Milwaukee accompanied the kids for the day. The two are aviation enthusiasts and wanted to thank Jack in person for his kindness. There is a gleam in Jack Mark’s eyes today as he looks over the kids playing near his hangar at Wittman. He smiles broadly watching the kids watch the airshow. Maybe he’s remembering atime when a day like this was only a far-off dream for a kid growing up in the south side of Milwaukee. Today Jack Mark made some "other" kids’ dreams come true and in the process, gave something back.