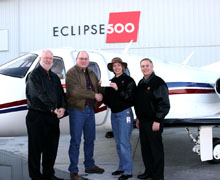 Eclipse Aviation beat Father Time again — even if just by a hair. On New Year’s Eve two years ago, the redesigned Eclipse 500 with Pratt & Whitney Canada PW610F turbofans flew as promised by the end of 2004. This time it was the promised delivery of an Eclipse 500 to a customer before the end of 2006, an event that took place on Sunday (New Year’s Eve). In the coming days, Eclipse will hold a formal delivery ceremony at the company headquarters in Albuquerque, N.M. For many years, the promise of this day has fueled the passion and perseverance of everyone associated with Eclipse, said Eclipse President and CEO Vern Raburn. As we deliver the first Eclipse 500, our dream of opening up the world of private jet travel to a new realm of customers has become a reality. The first customer Eclipse 500 was delivered to co-owners David Crowe, a private owner, and Jet-Alliance, a shared jet ownership company in Westlake Village, Calif. Crowe plans to use the very light jet primarily for recreation, while Jet-Alliance will employ it to serve the needs of its growing list of co-ownership clients. Eclipse Aviation currently has 37 additional aircraft on its production line in various stages of assembly, seven of which have completed final assembly and are being prepared for delivery. The company plans to aggressively ramp up production to deliver more than 500 aircraft by the end of this New Year. However, it still has not received an FAA Production Certificate that would permit such a high rate of deliveries. Eclipse’s order backlog is said to exceed 2,500 Model 500s.