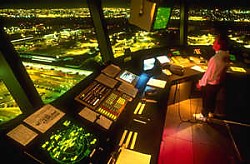 Professional Air Traffic Controllers Organization (PATCO) President Ron Taylor says the controversy over staffing levels at FAA towers is overshadowing an even bigger problem at the 233 contract towers the agency oversees. Taylor has asked Rep. Tim Mahoney, D-Fla., to call for a congressional investigation of what he says is chronic understaffing at the contract towers, which typically serve small-to-medium non-hub airports. “In many cases, and at different times, these towers are staffed by only one controller, with no back up within the facility for any type of emergency, Taylor claimed in a letter to Mahoney. “Staffing at these contract towers needs to be increased to ensure that the margin of safety is not compromised. While the debate over staffing at the FAA-operated towers centers mainly on the maintenance of mandated staffing levels, Taylor claims that contract towers already have less than half the number of functional controllers on staff than comparably sized federal towers. “A typical FAA federal facility that runs 100,000 operations a year has on average 10 working controllers, while on average, the contract towers operate with only four.” Taylor also notes that, according to an FAA assessment, contract towers have a better safety record than government towers, but he doesnt address that apparent incongruity in his letter. The FAA was unavailable for comment over the weekend.