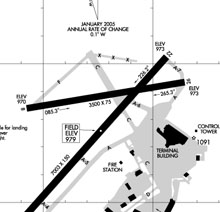 On Wednesday, the NTSB released transcripts and tapes from its investigation of the Aug. 27 Comair CRJ-100 crash in Lexington, Ky., which killed 49 of the 50 on board. Safety board investigators determined that the regional jet took off from the airport’s shorter, 3,500-foot Runway 8/26 instead of the intended 7,000-foot Runway 4/22. Transcripts from Flight 5191s cockpit voice recorder showed that the copilot — the lone survivor, James Polehinke — noted that the runway lights were off as the jet sped down the wrong runway. “That is weird with no lights,” he said, at 6:06:16 a.m., and Capt. Jeffrey Clay responded, “Yeah.” Seconds later, Clay said, “Whoa,” then the sound of impact is heard. The Safety Board had no comment or analysis regarding any of the items released. Polehinke, who lost a leg and suffered brain damage in the crash, has told relatives that he remembers nothing from that morning.