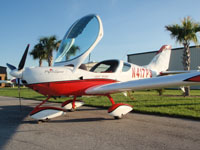 Wednesday, Piper Aircraft Inc. announced that it will no longer be marketing the PiperSport LSA, citing “differences in business philosophies,” with Czech Republic-based Czech Sport Aircraft (CSA), the PiperSport’s manufacturer. The two companies had worked together for roughly one year in an arrangement that had Piper brand a version of CZAW’s SportCruiser Light Sport Aircraft as the PiperSport. Piper had created a stand-alone distributor network to market the plane, but now says its long-term interests are best served without ties to CSA. Dissolution of the arrangement had nothing to do with the aircraft, itself. According to Piper, “The aircraft we were distributing is a good one.”

According to Piper, “as the company built that distributor network, it became clear that Piper’s core strengths and that of Czech Sport Aircraft were mismatched.” In a news release, Piper said it understood the implications its decision would have in the LSA segment and added that it is pursuing its core philosophy “to execute leading aircraft programs where the company [Piper] offers the most value to customers.” Toward that end, Piper said it is committed to the PiperJet Altaire business jet program and is moving to improve its global dealer and support infrastructure.