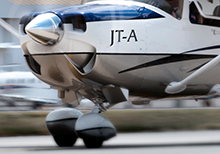 Cessna’s first production Turbo Skylane JT-A, running behind a Jet-A fueled diesel engine, Tuesday flew for 2.3 hours, the company announced Wednesday. The Safran-made 227-hp SMA engine is expected to use up to 40 percent less fuel than a comparable avgas engine, according to Cessna, burning 11 gallons per hour at 156 knots and delivering an estimated range of 1,025 nautical miles on 87 gallons. Tuesday, it delivered the plane to 152 KTAS at 8,000 feet over Independence, Kan. The aircraft performed as expected, according to Cessna senior test pilot Dale Bleakney. Certification and deliveries are expected soon.

Cessna said in April that it was on track for certification and first deliveries before the end of June. Standard performance specifications include a 1,385-foot takeoff distance (landing is 1,350 feet with a 590-foot ground roll), a 1,018 pound useful load, and maximum cruise speed of 156 kts. The JT-A features an “all-glass Garmin G1000 flight deck customized for Cessna” offering synthetic vision technology, a flight management system with autopilot controls and a “jet-level” GFC 700 autopilot with advanced override features. A “GA switch” or go-around button “disengages the autopilot, selects flight director go-around mode, and activates a missed approach, says Cessna. The company says it will start the four-seat single-power-lever aircraft at $515,000.