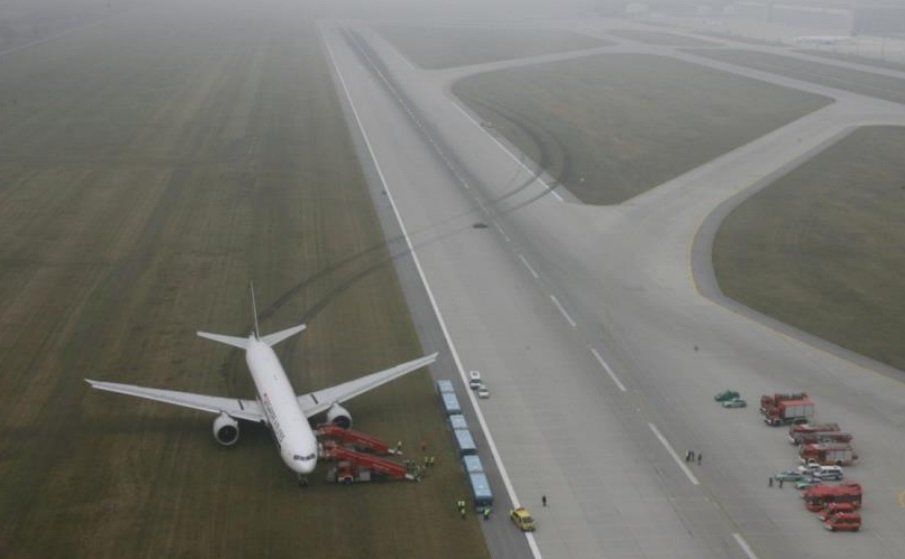 German investigators say a runway excursion by Boeing 777 that was on autoland was the fault of the pilots. The unusual incident happened in November of 2011 at Munich Airport but the report from the German BRU was just released this week. The BRU found the Singapore Airlines crew initiated the chain of events that led to the autopilot putting the aircraft on the grass. It was reported by Aerossurance on Monday. The flight was arriving from Manchester in the U.K. and was just about to touch down when an RJ85 taking off farther down the runway momentarily blocked the signal from the localizer at the opposite end. For a few seconds, nothing and no one was in control of the aircraft, which was less than 50 feet above the runway.

The widebody banked left before landing on the left main gear and veering left off the runway, even though the captain hit the go-around button on the throttle lever. The pilots were only able to gain manual control when they kicked right rudder, sending the big jet back across the runway where it finally stopped in the grass on the right side. There were no injuries and the plane wasn’t damaged. The investigation concluded the aircraft performed as designed and blamed the pilots.

The crew’s mistake occurred when they got their final weather report for the destination airport. As per their company’s procedures, the captain took over from the first officer as pilot flying because of the low visibility (1.25 NM) and ceiling (300 feet). Even though the conditions didn’t require it (they were CAT I), the captain decided to let the plane autoland but he didn’t tell controllers. The controllers were operating under CAT I procedures, which allowed them to clear the regional for takeoff ahead of the approaching 777. Had the controllers known the 777 was autolanding, the investigators said the controllers would have held the RJ85.

The timing of the events proved critical to the eventual outcome. The localizer signal was interrupted just as the 777 was about to touch down. When it banked left, the captain hit the automatic go around but not before the gear touched and caused the aircraft to reject that command. It instead went into the roll-out mode. The pilots were, however, able to manually retract the spoilers in anticipation of the go around and that likely contributed to their wild ride on the ground. The BRU recommended that flight crews be brushed up on the regs and do more sim training for localizer deviations. The mishap was caught on video.