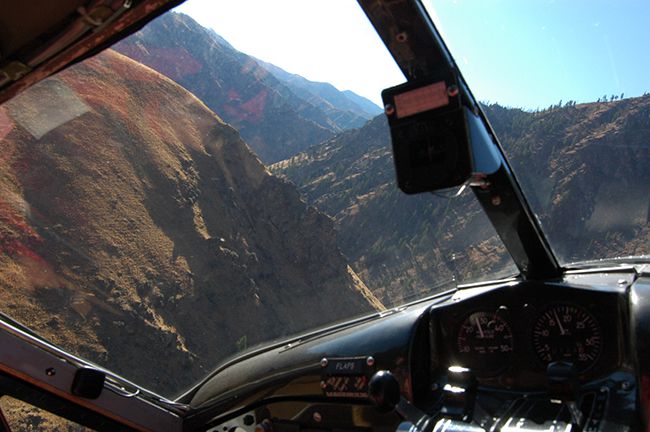 After abandoning the Santa Clara Valley for a new life on a small airport in rural Iowa, you’ll notice that your California flying buddies at Reid Hillview Airport (RHV) never visit, partly because they know if they leave their hangars unoccupied the county will raze them in its campaign to eliminate General Aviation. Additionally, everyone thinks you’ve moved to Idaho. The two states are frequently confused, given the similar spelling and unease many feel when asked to identify either on a map. Let’s compare and contrast.

Iowa is the squarish one sitting like a rumpled bathmat between two rivers of cultural significance. No, not the Passaic and Raritan but the Mississippi and Missouri Rivers. Above Iowa is Minnesota, and below is the less phlegmatic Kansas.

Made you Google. It’s actually Missouri. I think….

Idaho by contrast, is the foam finger west of Montana pointing at Canada as though warning, “keep those landing fees on your side.” Being Canadians, they politely comply. And export more comedians.

No one knows what the names Idaho or Iowa mean, but both states have rich aviation histories, and recently I was pleased to find a book by Chista Videriksen Worthy about Iowa’s bush and mountain pilots whose exploits extend back to the 1910s when simply boarding an aeroplane displayed moxie. I was fascinated with stories on wilderness flying and forest fire suppression, when I realized Iowa has no wilderness and little in the way of forests, so there are few rugged airstrips inside canyons, where hunters land Cessna 185s, loaded with guns, ammo, and bourbon and fly out with empty rifles and bottles, plus gutted caribou lashed to both struts to maintain lateral stability.

Chagrinned, I realized I was reading Worthy’s “Idaho Aviation,” and not “Iowa Takes to the Air,” by Ann Holtrgen Pellegreno, a pilot and writer who’s done more cool flying than I’ll ever attempt. For example, in 1967 Ann, flying a twin-engine Lockheed 10A Electra, retraced the round-the-world flight that Amelia Earhart had nearly completed 30 years earlier in a Lockheed 10E. Not to brag, but I’ve successfully flown my Aeronca Champ to New Jersey and back, following I-80 but landed no book deals.

With Idaho established as not Iowa, I continued reading and learned about the stuff Idaho pilots have tossed from aircraft since the 1920s. Fertilizer, DDT, fire retardant, mail, even fish and beavers have been hauled aloft and deposited in woodlands and rivers. To coax elk toward high country from lower elevations where they’d been wintering, pilots dropped salt from airplanes. I assume on each bag was stenciled: Free Beer Up This Hill. Nice work if you can get it and, especially, if you survive, which some pilots didn’t.

Sobering, but there’s risk in all flight, perhaps more so when running low through Idaho’s Hells Canyon. The name invokes Milton Caniff misadventure and reminds me of when I was retained to scatter the ashes of Dwayne, a former student, over an outdoor memorial service, although not over the family itself. This was decades before Covid so no masks. On the appointed evening, the family delivered their powdered loved one to my hangar. I’d never scattered ashes before, but inexperience rarely impedes poor judgment.

I’d expected an urn or even a Lebowski coffee can from Ralphs grocery store. Instead, I received a cardboard box, containing a plastic bag with a wire cinching the neck closed. I strapped the box to the Champ’s rear seat, and as the mourners departed for the ceremonial field of grief, I hand-propped the engine, untied the tail, unchocked the wheels and climbed into the front seat. Passenger briefing complete, I departed. All went well, as disasters tend to, before reality hit the fan.

Time on target was pre-sunset. Family members gathered on a west-facing knoll at a farm south of Des Moines—Iowa, not Idaho. Arriving from the east at 500 feet AGL, I opened the bomb bay by sliding the left window back. With power reduced, I clasped the joystick between my knees to hold altitude while reaching for the container. Doing so, I lost fifty feet so increased power to climb and adjusted trim while keeping my target in sight at 11 o’clock. The NTSB report was writing itself.

The plastic bag, holding Dwayne’s last, was reluctant to leave the box. Tugging and aviating, I finally pulled him free, untwisted the wire and hoisted him onto the windowsill. The plan was to hold the bag’s neck, trailing into the slip stream while flying with knees and feet on stick and rudders. As the assembled gazed skyward, I slowly release the powdered Dwayne into the slipstream, and it sounded like this:

Seems when you open a bag of grit near an airplane’s window, much of its contents flash back into the cabin to dowse the pilot/bombardier in bits of Dwayne who now had the unearthly consistency of drywall dust. The ceremony was modified as I wiped dead guy from my eyes, nose, and mouth. Panicking, I released the nearly full bag so as not to crash.

From the ground, the assembled watched the yellow airplane of which Dwayne had spoken so fondly. A spritz of gray plume etched the rosy sky as Mozart’s Requiem in D Minus for Cello and Didgeridoo, played on a cassette recorder, accompanied by distant swearing from above and the appearance of a ghostly orb. Like a comet emitting a dusty tail, it plummeted earthward to explode in a spectacularly percussive thud of the dearly departed. Wish I could’ve shared that solemn moment with the family, but mission accomplished, I returned to base.

At the wash rack I sprayed water onto the gray ash that didn’t readily flush away but congealed into soggy mortar. I bade farewell to semi-liquid Dwayne, the last pilot I’d ever intentionally toss from an airplane. And later that week when FSDO called, asking if I knew anything about the incident, I feigned ignorance, saying I’d been in Idaho that day.