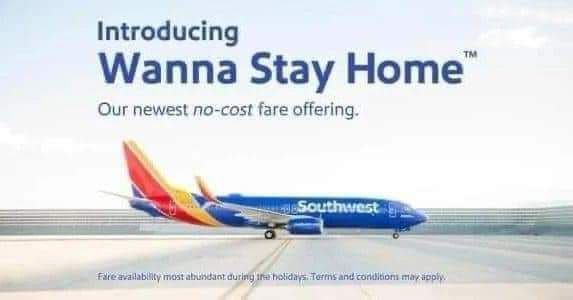 Viral joke of the week: Why is COVID-19 better than Southwest Airlines? At least it’s airborne. If you’ve been following the epic meltdown of Southwest Airlines this week—and how could you not?—there’s a grim truth in the joke. It will be particularly stinging for Southwest employees, who don’t deserve it, and a nasty rebuke of the company’s C-suite, who do. Or, at the least, the executives who followed Herb Kelleher’s retirement in 2001 are surely culpable, according to what reporting we’ve seen.

If the jokes and memes write themselves, so do competitor ads. Delta’s slogan could be, We Make Schedules, Not Excuses. At American, We Board You Like People, Not Cattle. United could go with When Your Bag Arrives, So Do You. Did you hear the one about the midnight text Southwest CEO Bob Jordon got? “Sorry to bother you on Christmas Eve, boss, but we’re having trouble with the Windows 3.0 OS for crew scheduling.”

Enough with the stupid jokes. I’m sure the memes will trickle on through January. Now comes the political circus as politicians and bureaucrats try to make lemonade out of Southwest’s blunder. While I’m sympathetic, especially to the rank and file employees who always gave Southwest a unique, friendly customer-centric ethos, the very same people had been warning that such a collapse was not just possible, but likely.

Both the pilot’s union (Southwest Airlines Pilot Association) and the flight attendants (Transport Workers Union) had complained for years that Southwest’s outdated technology for reservations and crew scheduling was fragile and vulnerable to disaster. “For more than a decade, leadership shortcomings in adapting, innovating, and safeguarding our operations have led to repeated system disruptions, countless disappointed passengers, and millions in lost profits,” the pilot union said in a statement.

On SWAPA’s Facebook page, a veteran Southwest pilot named Larry Lonero said this in describing the leadership of Gary Kelly, who took over when airline founder Herb Kelleher retired: “…as time went on the operation began to deteriorate. There was little investment in upgrading technology (after all, how do you measure the return on investing in infrastructure?) or the tools we needed to operate efficiently and consistently.”

This is a familiar refrain in describing modern public companies. “Shareholder value,” as pioneered by the since tarnished GE superstar Jack Welch, continues to animate companies to prioritize driving stock price over delivering the basic product or service or tending to customer service.

Cutting expenses is management’s go-to for driving earnings and minimizing customer service is a popular—and often invisible—way to trim what some companies see as “fat.”  There’s a reason computer-driven phone interfaces are programmed to make it all but impossible to connect with a human. Some companies are worse at this than others but what appears to have happened to Southwest is that its system had eroded to the point of not being able to handle the tsunami of disruption caused by a major storm during peak holiday travel. This may have been aggravated by staffing shortages at some of its stations. And that doesn’t even touch on the breakdown of its crew scheduling system. Flight attendant union president Lyn Montgomery said one of her members was on hold for 17 hours trying to check in with crew scheduling.

Southwest’s collapse isn’t necessarily an isolated case in aerospace. In his book, Flying Blind: The 737 MAX Tragedy and the Fall of Boeing, author Peter Robison traces how acolytes of Welch turned the company from an engineering/product oriented organization to one focused on shareholder returns. In short, it lost its way in its quest toward driving stock price. Ironically, with its fleet of 737s, Southwest suffered from that debacle. So has its stock price from its current troubles: Down to $33.40 from a year high of $48.07.

Ignoring the stock price, what happens next? Congressional hearings are being discussed as well as probes from the Department of Transportation, which means we’re entering the noisemaking phase. These investigations may reveal some curious details, but I suspect they’ll be more heat than light. In this three-minute mea culpa video, Southwest CEO Bob Jordan admitted to the company’s shortcomings and it’s no mystery what it will have to do.

The DOT has the authority to force airlines to honor their terms of carriage and to pay refunds, vouchers and reimbursements where required. But it doesn’t have the authority to insist on state-of-the-art IT nor to require that no customer shall be kept on hold for more than, say, 30 minutes. We could only hope.

I think some in the industry will say that Southwest has outgrown its point-to-point route model and that the legacy airlines’ hub-and-spoke is more resilient to disruption. That was painfully obvious in this episode, but I lack the information and knowledge to say whether more up-to-date IT would have saved it. Certainly they can do far better with crew scheduling.

Southwest has consistently scored well on airline customer satisfaction surveys because customers like what it offers: Friendly crews, no change fees, free baggage, on-time performance and open seating. It’s often ranked as a discount airline, but hasn’t been that for many years.

This could be an inflection point for Southwest. If Herb Kelleher were still around, he’d have some over-the-top PR program to acknowledge the enormity of the screw-up and pledge to fix it with generous, customer-centric actions. (Plenty of people think it wouldn’t have happened in the first place if Kelleher were still in command.)

The airline has already started to claw itself out of the hole with reimbursements and refunds for stranded passenger. The less it argues about how much to pay whom, the better. And as they rebuild the company, managers will have plenty of time to find out how much all the money they saved in band-aid IT will actually cost them. Hint: multiple millions.