Home Air Shows & Events Clear Your Calendar for 2003: Everyone Is Gearing Up for Flight’s Centennial...
Print
Email
Facebook
Twitter
Linkedin

On December 17, 1903, the Wright Brothers flew at Kill Devil Hills and changed the world. Their legacy is everywhere at EAA AirVenture – the vast array of winged things here are all descended from their brainchild. Also everywhere are signs of the excitement building over the coming Centennial of Flight, in 2003. North Carolina and Dayton, Ohio, will briefly become the center of the universe, but the celebration of aviation ranges far and wide beyond those epicenters.

“We were about to have to change the name to the National Air and No-Space Museum,” said Don Lopez, deputy director of the Smithsonian’s famous site in downtown Washington, D.C., during a press conference at AirVenture on Thursday. At about 25 years old, the Mall building is the most-visited museum in the world, with more than 9 million visitors a year, but it has space for only a small portion of the aircraft collection, and anything bigger than a DC-3 is out of luck. That’s about to change. Site clearance is already underway at Washington Dulles International Airport, about 20 miles outside of D.C. in northern Virginia, for a sprawling, spectacular new museum annex. Groundbreaking is set for late October. In December 2003, doors will open to over 700,000 square feet of display area – maybe as much as a million, if enough money can be found. And since the new Dulles Center will be right near a runway, visitors will be able to fly in to visit anytime. Four fly-ins a year will be hosted by the museum. 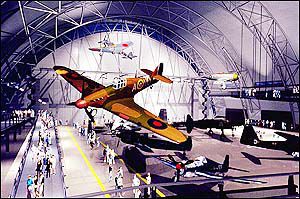 “We’re planning to have a cardiac specialist on site on all times, because people will just have heart attacks when they see this place,” joked Lopez as he described the new facility. An animated computer-graphic tour, shown in the NASM booth at AirVenture, shows that it truly is something to get your heart beating – 10 stories high, with walkways at 20 and 40 feet above the floor, and airplanes everywhere. They hang from the rafters in the massive Quonset-hut-style building, and they fill the floor space – 187 of them, including an SR-71 Blackbird, a B-17, the Enola Gay (to be moved from its present partial exhibit in the Mall building), and a Boeing Dash 80, the prototype of the 707. An adjacent space hangar will house the Space Shuttle Orbiter Enterprise, a Spacelab module, and much, much more.

The new complex will also include a restoration facility, an observation tower, an archival resource center, a large-format theater, and education facilities for school groups. Plus lots of retail space and restaurants to help lighten your wallet, since admission will be free, in the Smithsonian tradition. “We will have to charge a minimal fee, about $5 per car, for parking,” said Fran Tunstall, of NASM, “because the airport requires it.” The Garber facility in Suitland, Md., currently used for restoration, will become a site for storage and exhibit building. 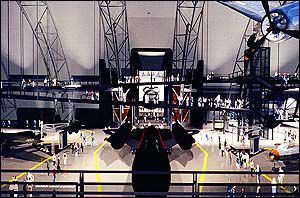 Officially, the theme for this year’s AirVenture is “Speed and Technology,” but unofficially, it seems to be “Give us your money, please.” From manufacturers to exhibitors to lemonade-sellers, the American Way is forceful here, but sometimes the cause is so good and noble that it makes you wish you only had more money to give. The NASM folks have been pretty frank that they have a long way to go to raise the $238 million this new museum will cost, and they will be very thankful to take whatever dollars you can spare. They were so grateful to one donor who gave them $60 million that they named the museum after him. The facility’s official name is the National Air and Space Museum Steven F. Udvar-Hazy Center. The observation tower will be named after the NASM’s former director, Donald D. Engen, who worked long and hard to promote the Dulles center and died last year in a glider accident. The National Air and Space Museum’s web site has extensive details on plans for the Dulles Center.

Aviation might have been born right here in the U.S., but it quickly spread worldwide, and the organizers of the Aviation World’s Fair 2003 have recognized that the Centennial deserves a global celebration. Tom Kallman, CEO of Kallman Worldwide – a New Jersey-based firm that manages aviation trade shows, including Paris and Farnborough – presented the details of what’s to come at AirVenture on Saturday morning. Still in the planning stages, the World’s Fair this month settled on the Newport News – Williamsburg International Airport in Virginia as its site, and already has confirmed pavilions from 12 countries, with 60 to 65 pavilions and 1,600 exhibits expected. The fair will run April 7-27, 2003, with the first week as a professional trade show and the final two weeks open to the public – a projected million-plus visitors, total. 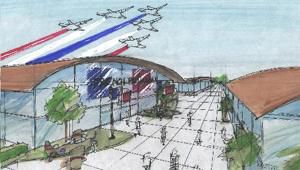 Winged things will fly through the air for two to three hours of each day, Kallman said, plus expect lots of static aircraft displays featuring aircraft from all eras, thematic halls depicting milestones in the history of flight, and special exhibits on themes including women in aviation, ballooning, airlines, mechanics, experimental aircraft, aviation sports and more. The funding for the event – estimated at up to $40 million – will come from sales of exhibit space, sponsorships, and admission fees in the neighborhood of $20 per day for adults, Kallman said. Stay updated on plans for the Aviation World’s Fair 2003 at the organizers’ web site.

… And A Bit Of Attention For Dayton and Kitty Hawk …

The Discovery of Flight Foundation and The Wright Experience, on exhibit in the EAA Action Pavilion at AirVenture, are working together to build and test authentic, full-scale reproductions of the Wright Brothers’ developmental aircraft and engines. They plan to have a replica of the Wright Flyer ready to fly at Kitty Hawk in 2003. North Carolina’s First Flight Centennial Foundation, also exhibiting here, is planning a week of festivities at Kill Devil Hills surrounding the December 17 anniversary. For more about The Wright Experience, listen to their original Wright engine in action and find a link to their web site at AVweb’s Day 4 Oshkosh coverage. The First Flight Centennial Foundation also has a web site. 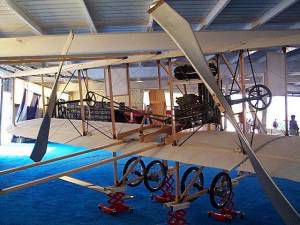 Also on display in the EAA Pavilion is a replica of the Vin Fiz, the Wright Brothers Model EX airplane that in 1911 made the first transcontinental flight. That flight took 84 days, including five major crashes. An organization called Inventing Flight: Dayton 2003, intends to recreate that flight – the route at least, hopefully without the crashes – in 2002, to promote Centennial events in Dayton the following year. The aircraft is scheduled to begin flight testing in September, and four copies of the model are to be constructed for the program.

The Vin Fiz flies at 50 mph, and is ready to rotate after a 100-foot ground roll. Pilot Dana Smith, who plans to fly the airplane on its cross-country odyssey, said it will be outfitted with a ballistic recovery system parachute specially packed to blend into the top wing. “The idea is to keep it safe,” he said. Inventing Flight promises that their web site will have more details on Dayton plans as they develop.

… Bottom Line: Something For Everyone In 2003

Anyone whose life has been touched by the magic of wings feels a debt to the Wright Brothers, and it seems inevitable that we all have to set aside some time in 2003 to acknowledge that fact with a pilgrimage or an observance of some sort. For some, it might mean a personal nod to the founders of flight as we go about our daily lives, but for those of us who choose to mark the Centennial in a more spectacular way, there will be no shortage of choices, and more are sure to surface between now and December 2003 – as the second hundred years of aviation gets off to a roaring start.