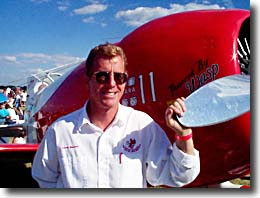 It’s like the tattooed biker my Mom always warnedme to avoid. “It’s for your own good,” she would say. “Something like that will only bring you grief.” MaybeDelmar Benjamin’s mother never told him to stay away from thingsthat would hurt him. Or, maybe she did and he just wasn’t listening.

Benjamin is a lanky blond with a preference for shadesand jeans, who, when not flying his pilot-eating plane is outtending his 25-hundred acres of wheat in Shelby, Montana. It’snot the pretty part of Montana, he’ll tell you, but you can “see”the pretty part from there. If you’re wondering why a wheat farmerwould have taken up the considerable challenge of reconstructingone of the world’s most romanticized racing airplanes, then you’vejust got to know a little about Delmar Benjamin.

Benjamin has always felt the need for raw power,even as a kid. His fondest memories of flying are of crashing. When he was eight or nine his Dad landed in the trees. No onewas hurt, and Benjamin thought the whole adventure was “cool.”Flying a Cessna 152 was not. When he was sixteen years old, hesoloed in the safe, slow plane and was bored to tears. Benjaminwanted speed and thrust, and he found it in motorcycles and hotrods, and then, when he was 19, in a souped-up Lincoln Continental. Many years later, it was a Pitts Special that got him interestedin flying again, and a crazy idea to build a GeeBee kept it going.

The Granville Brothers built their first stumpy littleR-1 in 1931, and shoved enough raw horsepower into the cowlingto propel Jimmy Doolittle to an average of 252.7 miles per hourand first place in the 1932 Thompson Trophy race. The plane wasfast and the technology was the newest of the time and every pilotwanted to fly it. But, the GeeBee racers, much like flying itself,were terribly unforgiving of complacency or mistake. Within thefirst 33 flying hours, the original R-1 and its lower horsepowerbrother the R-2, had been crashed five times, and two pilots werekilled.

Benjamin knew the GeeBee’s history when he set outto reconstruct the little racer, but still had no idea how life-changingit would be. He has had close calls in the plane-uncontrollableoscillations and out of control landings-but it was the GeeBee’sexhaust system that nearly killed him. He has had lead poisoningand has developed a liver problem after long hours breathing lead-filledexhaust gases circulating in the cabin with him. On a trip toKokomo, Indiana, he became so ill he could hardly stand. He crawledinto his plane and returned to Montana, thinking that if he goingto die he wanted to do it in his own bed. He didn’t die, buthe also didn’t get out of bed for three weeks. It was then hediscovered the constantly circulating exhaust gases had givenhim a full blown case of lead poisoning. Treatment only made itworse, so now he’s letting it run its course, knowing the half-lifeof the lead in his body is 30 years. He admits that blindsidedand surprised him-because up until then, he just knew someonehad been watching over him. 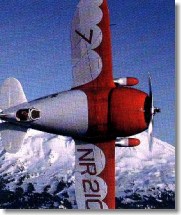 Benjamin speaks of the Granville Brothers the waysome people speak of religion. He tells AVweb he has akarmic connection to the R-2. “There’s some kind of energygoing on there. I don’t understand it, but there’s somethinggoing on. When we were working sixteen hours a day on the plane,sometimes you would feel like the Granvilles are looking overyour shoulder…there’s been some things that happened, andI thought, wow, you coulda died there, but things worked out. So I get the feeling that someone’s looking out for me.” If someone is looking after him, that someone has a wickedsense of humor. In addition to his illness, a judge granted hisex-wife much of his future airshow profits. So now, like theThompson Trophy racers of the 1930’s, he flies out of economicnecessity.

Money has been tight from the first. He sold hisBuecker Youngman and Cessna Skymaster to build the GeeBee…butby the time that money was gone, the plane was still just half-finished. He managed to convince the Small Business Administration to givehim a business loan, but he knew it was a one-time shot. “WhenI flew it, I had payments to make, so I had no choice but to startflying airshows right away. My first show, we started at Sun’n Fun in the spring. My first flight in it was climbing in andgoing to Sun ‘n Fun.” Since then he has amassed 1138 hoursin the R-2, more than Doolittle, more than Lee Gehlbach, morethan anybody. And the plane he calls the “shortest, snakiesttaildragger ever built” is still a handful. He knows overconfidencewill kill him and the first thing he thinks when he gets in theplane is how he’s going to land it.

“When you fire it up, you’ve got this huge engineon a little airframe and that feels very good, like a sportscar. It’s rumbling away…it makes you happy just warming up and thenwhen you taxi out to the runway you can’t see anything, you’vejust got to get a little sideways and look down the runway. Andthen you go for a ways and wonder what’s up there again and youlook again. And, you can’t really go back and forth because youhave to go so far to see anything, it’s not like a Stearman orsomething, you can’t s-turn back and forth and see something,this one you have to get 90 degrees to see down the runway.” 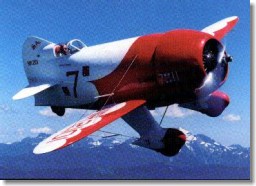 “First I bring the power up and I use all ofit, it really goes nice and straight. You got the stick forwardand you’re waiting for the tail to come up, because you can’tsee anything until the tail comes up. And you get the tail upand then you can see down the runway, you need to hold it on until120 (mph), because it’s got aileron reversal. If you dialin an angle of attack around 100 it would fly off, but the aileronswould be reversed at that speed, so if you move the ailerons youwould snap in. On my first flight, I got pilot induced oscillations-firstin yaw, and then when I rotated, in pitch. I got through thatand it hasn’t happened since. I was sitting on a seatback parachute…Iwas moving back and forth and the airplane was out of sync withme. We got the seat fixed.”

“You fly with kid gloves…it’s a very lighttouch. It doesn’t have any stick pressure and sometimes it usesnegative pressure. But once I got accustomed to that, I likedthe way it flies. The rudder is 13 inches deep and 6 feet tall,very large when you look at it…and it’ll beat you to death. You hit the rudder and your head hits and canopy. See, the canopy’spretty scarred up there, I always seem to hit my headset on theleft side for some reason.”

“On landing, you need to keep speed up so youdon’t get into aileron reversal, and you need to see the runway,so usually when I’m downwind, when I cross the numbers I starta turn and come right down to the runway and level out and touchdown and try to touch down easy because the shock absorbers onthis thing don’t work well, and it’ll tear the gear off the airplane.Then your elevators quit working at about 80 mph, so the tailwill come down on its own at about 80-100 mph and that is toofast to be going down the runway and you can’t see anything infront of you. And there’s so many curved surfaces you can’t lookout one side and tell if you’re straight, so you try to put yourhead back against the headrest and you try to keep the same amountof runway on both sides–you can only see a little pie shapeof runway behind the wings and you try to keep the same amount.” 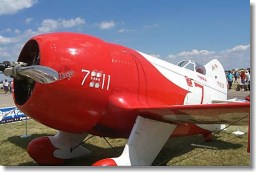 The GeeBee is a constant challenge, and that is whatkeeps Benjamin going…but with more than 1,000 hours in it,he is now looking for another project, another first. What willit be? “The X-prize. I want to be the first civilian intospace,” he tells AVweb. His eyes light up as he talksabout building a rocket that will propel him straight up to theedge of space, then glide back down. It is at that moment thatanother Oshkosh fan asks him to autograph another “DelmarBenjamin GeeBee” T-shirt, and Benjamin floats slowly downto earth again.