One Record Falls, One In Question

“This is the worst part,” says Exxon Flyin’ Tiger Marketing DirectorDonah Nevill. “I have no idea what’s going on. I’d much rather be up therethan on the ground.” “Up there” is somewhere high above Wittman RegionalAirport, where pilot Bruce Bohannon is trying to break two time-to-climb recordsafter a long dry spell. The last time Bohannon broke a record was here atOshkosh last year. Since then, two attempts have ended badly, the last at thisyear’s Sun ‘n Fun, where Bohannon made a dead-stick landing after his enginefailed. Bohannon is confident today will be different. If the weathercooperates. If the plane works. If he flies well. Lots of ifs.

Bohannon and the Flyin’ Tiger roll onto the taxiway a little after 9 a.m. andthen sit, awaiting clearance, as a line of departing aircraft inch forward forRunway 18R. Finally at 9:27:36 a.m., the Tiger flexes its wings, wags its tailand speeds toward the clouds, toward 30,000 feet. The Tiger isn’t pressurized,but Bohannon carries a small canister of oxygen. Smaller is better in therarefied world of speed, because smaller usually translates into lighter. Tokeep the plane as light as possible, the Flyin’ Tiger also launches with justenough fuel to get it up and back down again … no out-of-the-way vectors, noholds, no trapped-on-top fit into the plans. 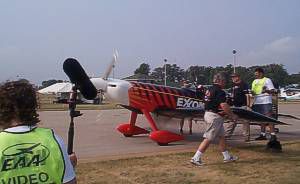 As a guy named Murphy will tell you, plans change, and on Sunday Bohannon gotvectored: twice, once at Chicago Center’s request to avoid airline traffic,another at Bohannon’s to aim for clear sky, which is generally smoother thanclouds. While his crew on the ground was squinting into the clearing sky,Bohannon was furiously scanning … EGT, airspeed, RPM, and stopwatch. “Theworkload is pretty high because the environment is changing so rapidly,”Bohannon told AVweb after landing. “But this workload is without thenitrous [oxide], which was a nightmare. If I overlean now, I lose a little power… whenI did that with the nitrous, it was a disaster. Today, I didn’t have to worryabout Mattituck (the engine maker) beating me with an old crankshaft.”

After landing, a tape inside the plane containing a recording of engineinstruments and altitude was pulled to be sent to the National AeronauticAssociation (NAA) in Washington, D.C., for certification. NAA can give anunofficial opinion the day of the time-to-climb, but before the numbers can taketheir place in the record books, they have to be crunched for true altitude andtemperature. The two records Bohannon is aiming for are the 6,000 meter (19,685feet) and the 9,000 meter (30,000 feet) time-to-climb marks. By yesterday afternoon, Bohannon wasdeclared unofficial 9,000-meter champ with a time of 19:47 … the 6,000,meanwhile, remained too close to call. Bohannon flewit in 7:48. Once the wild cards of temperature and true altitude are figured in,the 6,000-meter record could belong to Bohannon as well.

The End Of A Long, Cold Year

Whether the 6,000-meter records falls or not, the monkey is off Bohannon’s back.Though Exxon and Flyin’ Tiger’s other sponsors remained very supportivethroughout the year, Bohannon was feeling pressure … from Bohannon. “Ijust wanted to crawl into a hole and disappear.” Throughout it all, Exxonhas been there. “They never lost faith. I can’t tell you how much thatmeans.” 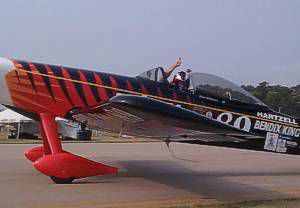 Bohannon was already under enough pressure on Sunday. “You can’t imaginewhat it’s like sitting out there for 45 minutes waiting for a clearance,”he said. It was nerve-jangling enough to make Bohannon forget both his jacketand gloves, which he realized when the cockpit started getting very cold.”It was like hugging an iceberg when he got out of the plane,” Nevillsaid. “You felt pretty good,” countered Bohannon.

So what’s next for the multi-record holder? Possibly tackling a record to 35,000feet. But after all the climbs are made, Bohannon would like very much to gethorizontal, as in a cross-country from San Francisco, Calif., to Mattituck, NewYork, the home of Mattituck Engines. Or even better …”Around the worldnonstop. But not in this airplane. I’d like to put that on the frontburner.” Nonstop? “Oh yeah,” smiles Bohannon. “But if I toldyou any more, I’d have to kill you.” 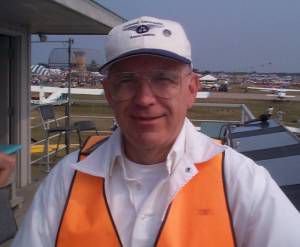 Larry Steenstry, chairman of the Contest & Records Board of the NationalAeronautic Association, is the person to whom Bohannon & Co. turn whenmaking an attempt. Steenstry is not someone who merely enjoys watching historybeing made, he has made it himself. In April 1999, as a captain with UnitedAirlines, Steenstry took the time-to-climb record for any jet 77,000 to 99,000pounds. Since then, Steenstry has moved to piloting 747-400s along the routes toJapan andChina.

“My record flight took about two months to set up, but I finally got theokay from United and the FAA. I was carrying 19 passengers from San Francisco,Calif., to Medford, Ore. From brake release up to altitude, we averaged 4,400feet per minute. When we had made it, I told the passengers what we had done andgave them all pictures of the plane. I told them it wasn’t by accident that aplane with 124 seats had only 19 passengers.” Steenstry says he flew the737 “completely by the book” and that no one on board had any idea wasgoing on. But when it was over, the old 30,000-foot record of 9:31 minutes hadbeen replaced by 6:41.

Rocketmen of the world, unite!