Got a favorite old-time airplane? A preferred class of plane? Maybe an erathat’s particularly appealing? If you answered “yes”, then you likely have a favorite museum, aninstitution that captures the essence of that bird, period or type of flight.What a credit to the people who recognized aviations progress as they came ofage during times of aeronautical history-making and became preservationistssaving precious artifacts. And they’ve grown a bumper crop of institutions,these preservationists – more than 200 museums in the U.S., by the count of alist kept by aviation’s master collector, the Smithsonian’s National Air & SpaceMuseum. 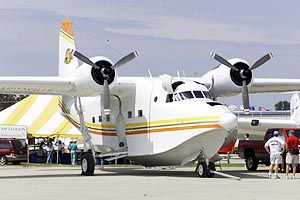 But regardless of what hall of history you name, none of those collectionsquite match the depth and diversity of the flying museum that collects at atypical AirVenture fly-in. We’re not talking about the unique collection of artifacts EAAhas collected over its 48-year history and ensconced in the Air AdventureMuseum. We’re talking about the breath-taking, fire-breathing, fuel-burning,ear-tingling collection that gathers at EAA’s annual fly-in convention. AndAirVenture 2000 just may top the pack in attracting a diverse, interestingassembly of airworthy museum pieces. 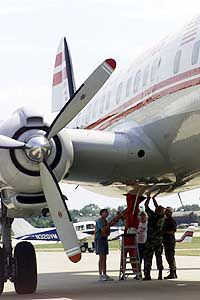 Here, you’ll find your golden-era antiques and war birds of nearly all eras; somewere history makers, others their relative obscurity itself the claim to fame.Some deserve mention by dint of survival, alone; they live and fly well beyondtheir time. And it’s the flight in and the return home that keeps them alive andambulatory, rather than existing as an artifact of aeronautics exhibited like anarcheological find within some giant hall removed from any direct contact withthe skies they once plied.

They grace the AirVenture flight line because their owners refuse to seethem go static, maybe even to help the owners fend of feeling static.

Regardless of why their tenders bring them together, their presence helpsmake EAA’s AirVenture Oshkosh gathering more than a fly-in, more than a tradeshow and more than an air show. They make Oshkosh part of our connection to ourpast, equal to its status as showcase for our future.

And for a community not yet a century old, the collection in this museuminordinately well. 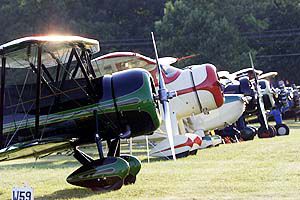 From the heady days between the world wars until after the second andcontinuing today, aviation acquired the fascination of a global community thatinspired tremendous entrepreneurship and innovation, from the Howard DGA seriesto the basic stick-and-rudder airplane and a bit of everything in between. Soappealing is this time and aircraft type that innovators the world aroundcontinue to pursue ideas and innovations that will work for the masses. Forexample, the Eclipse unveiled in mock-up form this past week represents as big adream for progress as the Howard, the Stinson Gull Wing, the Staggerwing or theCessna 195, or even the Mooney M-18 Mite and the original Taylor E-2 or a Funk.

Standing in a museum setting a few feet away from these history-makers allowsa great appreciation for their overall lines and construction; pouring over thedetails from inches away imparts a stronger sense of each graceful line andexample of fine craftsmanship. But only seeing them fly, almost breathlesslywatching them touch down, standing in awe as they taxi by into vintage camping,eliminates the abstract and breaths life, sight, sound and motion, into theexperience. 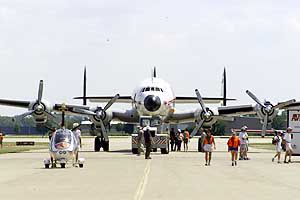 Among the other classes of flying museum pieces are the elder statesmanof air commerce, like the Ford and Stinson Tri-motors, the DC-3 and the LockheedElectra and Constellation that helped popularize air commerce in general andpassenger service in particular. From the seeds of a practical personaltransportation machine bloomed a fledgling airline community, just as thegolden-age wings help foster the establishment of general aviation and modernairplanes.

Universally round-engined, they connect a public now conditioned forhuman-mailing-tube travel with a time when air travel held cach – if you flew,you had arrived – and the service orientation more resembled that of ocean andrail lines than fast food restaurants. Of course, the buck buys more passenger miles than inthe old days, but no money alone can buy the sense of luxury and exclusivity ofairborne berths and jacketed stewardesses of the airline industry’s formativeyears. 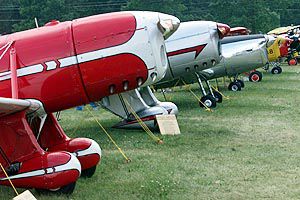 From the vintage PT-series of primary trainers to the T-model pilot makers ofthe modern military aviator, AirVenture draws something to fit almost every taste… andin droves. This also is a segment with a distinctly international accent, withnames hailing from North America and Europe represented.

Examples: the Ryan and Stearman PT-series trainers abound, as do BeechMentors, North American T-6 Texans, and the de Havilland Canada DHC-1 Chipmunk;there are more than a few examples ofthe P-51 Mustang that helped seal the outcome of World War II. And lest weforget, there were the few, proud and unarmed L-series liaison birds flying intoharm’s way. And we can’t forget friends from afar: de Havilland brought usthe Moth biplane trainers from England, as well as the DHC-1 Chipmunk, the firstdesign by the Canadian division of de Havilland.

The addition of combat choppers did nothing more than increasethe representation of aviation’s most-militant practitioners and the birds theyflew. But overwhelmingly, the warbirds collection seems equally expanded beyond the combat craft and sundry trainers to those who fought their battlescollecting intelligence and ferrying wounded, hauled supplies and general staffalike. 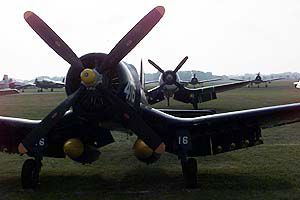 But the biggest stars remain the old warriors of wars past, ranks thatsomeday will catch up with the war in the sandbox in history but not likelyallure. Little matches the energy level of their engines or the nostalgic drawof magic of their names: Sabres to Starfighters, Mustangs to Mitchells, Spits toSpads, Camels and Cobras. The more they roar, the more they live, and the longerthe life of the memories of the men and women who made ’em and flew ’em. Andwith old warriors like Bud Anderson and Chuck Yeager still around to fly theirmounts, the memories of those people and times can hardly be called the past;perhaps the recent present, but not gone – not yet.