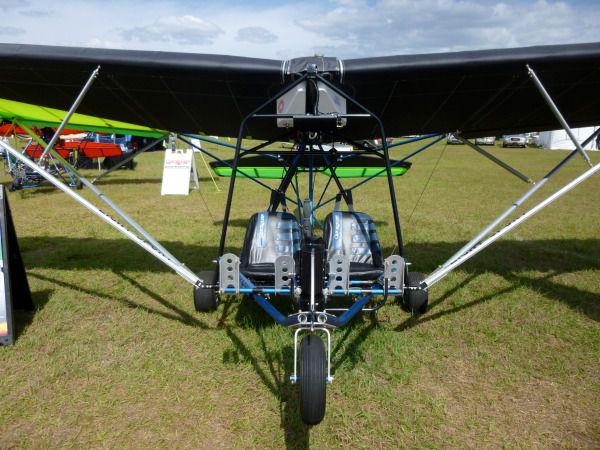 Quicksilver announced last year at EAA AirVenture they had a two-seat S-LSA model in the works, and this week they brought the finished product to Sun ‘n Fun. “There’s been a lot of very interested people looking at it,” Eugene “Bever” Borne told AVweb on Saturday on the Paradise City flight line. “We’ve definitely created a little stir.” Most of those who showed serious interest, Borne said, seemed to be pilots who already own an airplane, and this would be their second aircraft, for purely recreational use. “These people tend to be less interested in building an airplane, and are looking for something that’s ready to fly,” he said. A kit version of the aircraft, which would take 40 to 60 hours to build, would cost about $23,000, Borne said. The S-LSA ready-to-fly, which is expected to complete its ASTM approval by the end of the year, will cost about $40,000.

The other advantage of the S-LSA model, Borne said, is that it provides a legal way to give instruction. “That’s the big reason for it,” he said. The company has established manufacturing centers for the S-LSA in Minnesota and Louisiana, Borne said. From there, the airplane can either be trailered or flown to its new owner’s location. Earlier in the week, company president Will Escutia said at a Sun ‘n Fun news conference that kit sales overall for the company have gone up 15 percent in the last two years. About 15,000 Quicksilver aircraft are flying in 100 countries. Overseas, they are often used for commercial purposes, such as crop dusting. Escutia added that the company is working with a partner on an electric-powered aircraft, but “hurdles still have to be solved.”