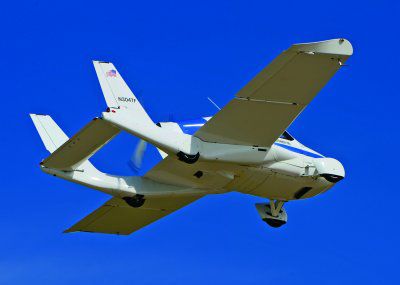 The Terrafugia Transition flying car flew for the first time at a public event on Monday afternoon at EAA AirVenture in Oshkosh. The aircraft drove away from its exhibit on the south side of the field, with the company’s chief test pilot, Phil Meteer, at the controls. He drove down Celebration Way and onto Phillips 66 Plaza, steering the airplane like a car, trailed by a crowd of curious onlookers, with the wings folded up. Once on the ramp, the wings unfolded, and Meteer stepped out of the cockpit to conduct a preflight before driving down to the end of the runway for takeoff. In the announcers’ booth, company CEO Carl Dietrich said he and his company had been looking forward to this flight since they first launched the project in 2006.

The airplane flew around the field a few times, then after landing, the wings folded up again, and Meteer drove off the field to meet the crowd at Phillips 66 Plaza — click here to watch the AVweb video. The airplane will fly again on Wednesday at 8 p.m. prior to the night airshow, and is on display all through AirVenture at the Terrafugia exhibit.