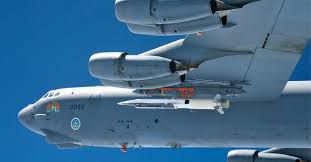 The Air Force says it successfully tested a hypersonic missile in mid-March but didn’t announce it at the time because it didn’t want to inflame tensions with Russia. The test occurred off the Pacific coast just as President Joe Biden was heading to Europe to discuss the war in Ukraine with NATO leaders. Russia has claimed it used two air-launched hypersonic missiles on Ukrainian targets early in the war but the Air Force test did not appear to be in response to that. The Russian missiles weren’t new technology. They were adaptations of a decades-old ground-based ballistic missile system called the Kinzhal.

The Air Force test used a Lockheed Martin version of the Hypersonic Air-breathing Weapon Concept (HAWC), which uses a rocket to boost the vehicle to high speed where a scramjet engine ignites and pushes it to Mach 5 or faster. The Air Force said all went well with the test but it didn’t give much detail. The missile traveled 300 miles at 65,000 feet but they didn’t say how fast it went. Last September the Air Force tested a Raytheon HAWC missile and said it also reached Mach 5 or above.