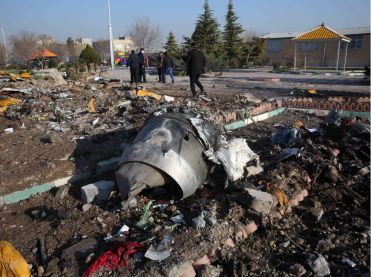 Ukrainian investigators said Wednesday that they were considering an antiaircraft missile attack or terrorist action as the cause of Tuesday night’s crash of a Ukraine International Airlines flight near Tehran. The Boeing 737-800 was enroute from Tehran to Kyiv when it crashed shortly after takeoff, killing all 176 people aboard. Some 45 Ukrainian investigators arrived in Iran Thursday morning to begin the accident probe and to identify and repatriate the remains of 11 Ukrainians aboard the flight, including nine crew members, according to news agency reports. Iranian authorities confirmed Wednesday that the aircraft was on fire before it impacted near an amusement park.

Oleksiy Danylov, of Ukraine’s National Security and Defense Council, said on a Facebook page that the investigators want to examine the wreckage for evidence of debris from a Russian-made Tor anti-aircraft missile. Photos of the crash fragments revealed evidence of possible shrapnel damage consistent with a missile attack but Ukrainian investigators are also considering an onboard bomb.

Earlier in the day, a report from Iran’s Civil Aviation Organization said that both witnesses on the ground and other aircraft crews reported that the 737 was on fire before it crashed. “The trajectory of the collision indicated that the plane was initially moving toward the west, but after encountering a problem, it turned to the right and was approaching the airport again at the time of the crash,” said Ali Abedzadeh of Iran’s CAO. News agencies have reported that Iran has recovered the aircraft’s flight data and cockpit voice recorders but will not share access to these with Boeing, although other countries have been invited to participate in the investigation.

Passengers aboard the aircraft were mostly Iranians, with some Europeans and about 60 Canadians, according to a report in the Washington Post on Thursday.