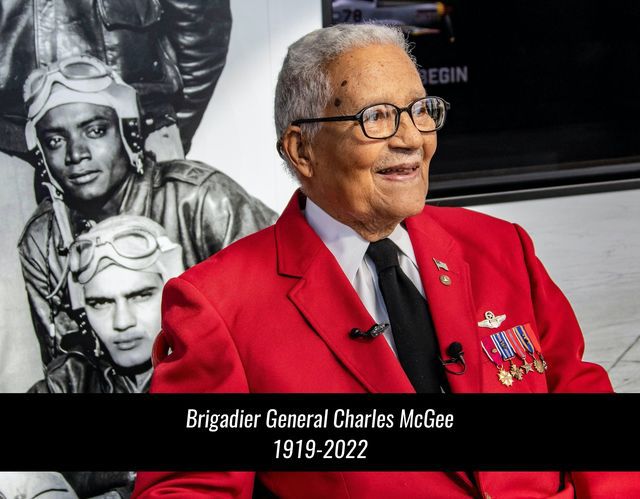 A decorated career officer, tireless volunteer and famed member of the Tuskegee Airmen, Brigadier General Charles McGee died in his sleep at home overnight Jan. 16 at the age of 102. “The day we all have dreaded has arrived and we are sad to report that our mentor, hero, and inspiration has passed,” the Commemorative Air Force’s Red Tail Squadron reported in a Facebook post Jan. 16. The organization said they were told of his death by his daughter Yvonne. “She said she found him this morning with his hand on his heart and a smile on his face.”

McGee joined the Tuskegee Airmen in 1942 and flew 137 combat missions over Europe in P-39s, P-47s and P-51s. He also flew 100 P-51 missions in the Korean War and 172 combat missions in the RF-4 photo-reconnaissance version of the F-4 Phantom in Vietnam for a three-war total of 409 combat sorties, among the highest of all Air Force pilots. He retired as a colonel in 1973 but was promoted to brigadier general by President Donald Trump for his 100th birthday in 2020.

McGee held numerous high-level posts after his retirement from the Air Force but was best known for his work with the Tuskegee Airmen and the CAF’s Red Tail Squadron. “Charles spent over 40 years relentlessly reaching out to young people to help them understand how they can overcome obstacles and achieve their full potential,” the CAF’s post said. “To that end, he was our biggest supporter and most valuable resource as we developed and executed the CAF Rise Above program.”