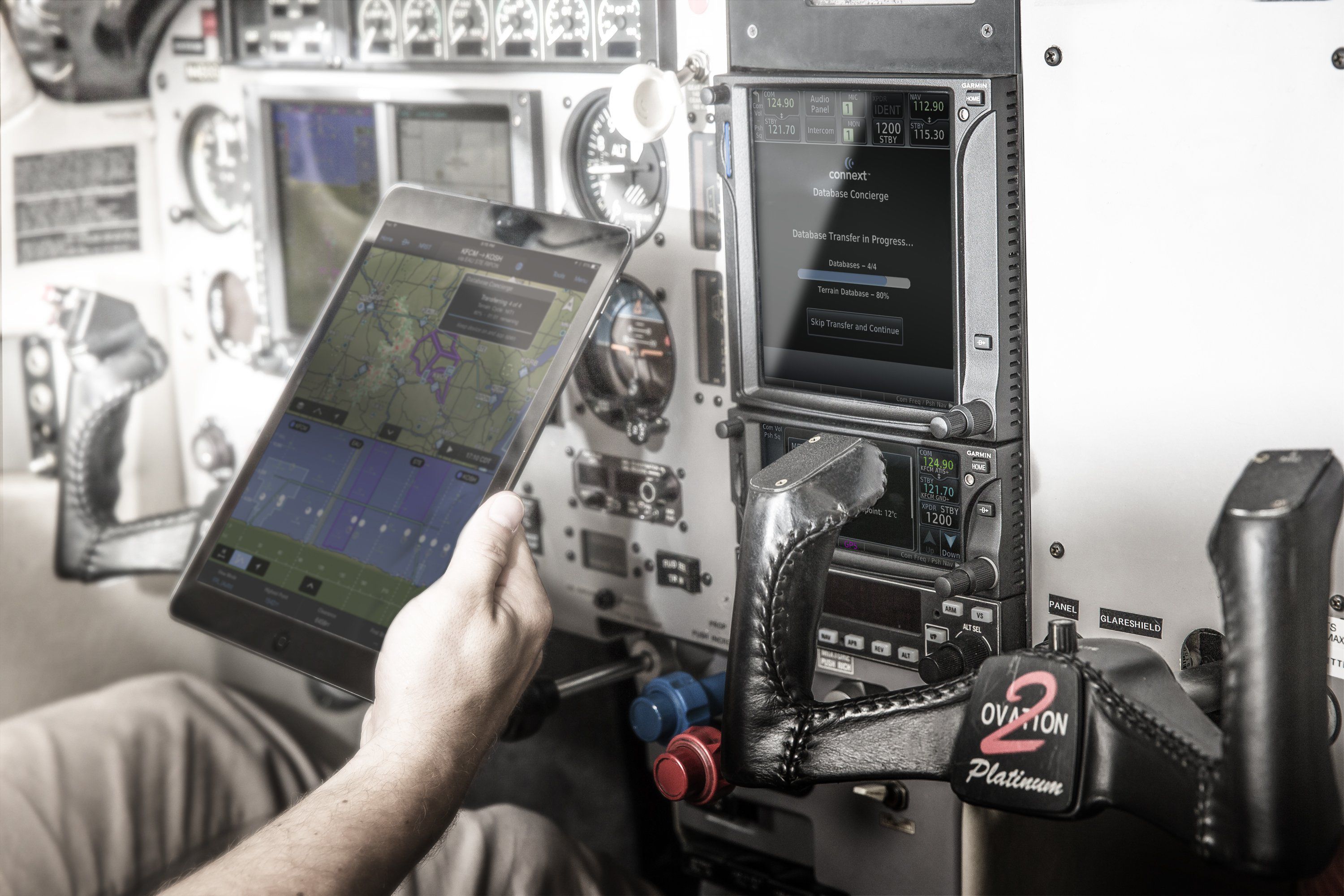 Garmin announced today its latest-generation cockpit wireless system, Flight Stream 510. Unlike the earlier Flight Stream 110/210 (which are remote Bluetooth transceivers hard-wired behind the instrument panel) the new Flight Stream 510 wireless hub is self-contained in a MMC (MultiMediaCard). The miniature wireless device is simply placed into the SD card slot of the company’s GTN750 and GTN650 GPS navigators, where it serves as a Wi-Fi and Bluetooth data hub.

Priced at $1495, the Flight Stream 510 is multi-purposed and is integral with Garmin’s Connext cockpit tablet architecture, through the Garmin Pilot tablet app for iOS and Android. Among other things, the system is intended to simplify the navigation database update process of Garmin’s GTN-series navigators and the G500/G600 PFD/MFD.

It works like this: Instead of downloading new databases to an SD card from a remote computer (a time-consuming process with a risk of file corruption), the data is automatically downloaded to the Pilot app and then streamed wirelessly to the panel navigator once you power up the avionics. Garmin says the Wi-Fi database transfer process is faster, while the device also enables two-way flight plan transfer, the sharing of ADS-B traffic and weather, plus backup attitude information to the tablet when a G500/G600 PFD system is in in the mix.

Along with the Flight Stream 510, Garmin has lowered the annual cost of its database packages. For example, a one-year subscription for the GTN650—which includes Garmin’s navigation data, SafeTaxi, obstacles and terrain—is $499. The database for the discontinued GNS430W and GNS530W is now $449. There is a new USB datacard programmer for the GNS (replacing the Skybound Reader device) for $69.95. For panels with multiple Garmin devices, database management gets easier.

Garmin’s new OnePak annual database package is streamlined into a single subscription for all of the Garmin avionics in one aircraft, including a qualifying portable GPS. Garmin also throws in a Garmin Pilot IFR Premium subscription for existing subscribers. OnePak packages are compatible with the GTN and GNS-W navigators, G500/G500H/G600, G1000/G2000/G3000/G5000 integrated avionics suites, plus portable and experimental avionics—including G3X, G3X Touch, G900X and the aera-series GPS devices.

There is a major software release for the GTN750 and GTN650, which enables the Flight Stream 510 function, pinch-to-zoom map functions, database synchronization between GTN navigators and a G500/G600, European VRPs (visual reporting points), plus embedded Telligence voice command.

The Telligence software (which trickles down form the company’s latest voice-command audio panels) is loaded with over 300 voice commands, activated with a dedicated push-to-talk switch. For example, keying the switch and speaking “tune destination tower” automatically tunes the appropriate tower frequency in the GTN. Other commands include “say winds” and “say distance to destination.”

Last, G500 and G600 users finally have access to Garmin’s TargetTrend and TerminalTraffic traffic interface, previously only available on the GTN navigator and the Pilot app. The field-updatable software upgrade also makes the system compatible with Garmin’s GTX345 ADS-B In traffic and weather transponder so FIS-B weather and ADS-B traffic is overlaid on the moving map and on dedicated weather and traffic pages. The software (which is free, but doesn’t include shop labor) also enables the G500 and G600 to send traffic, weather, GPS and AHRS data to the aera 600 and 796/796 portable GPS navigators—via the Flight Stream Connext network—to the Garmin Pilot app and to tablets running ForeFlight Mobile.

Garmin says the Flight Stream 510 and GTN-series upgradability will be available this coming August (approved under the GTN’s AML-STC), while the new data packages are available immediately. Look for an upcoming Garmin product overview video as part of AVweb’s AirVenture 2016 show coverage next week.