It’s getting to be almost impossible to fly anywhere without aMode C transponder. This equipment is now required in all Class A, B, and C airspace,within 30 miles of primary Class B airspace airports, and anytime you’re above 10,000feet. And if the FAA has its way, that altitude will soon drop to 6,000 feet.

ATC is watching you

ATC radar facilities presently have both both primary and secondary radar. Primaryradar (sometimes called "skin paint") works on the principle of bouncinghigh-powered microwave pulses off objects and detecting the reflected echo. It’s the samesort of radar that was used in World War II to detect enemy aircraft.

Primary radar has lots of limitations. It works best with large all-metal aircraft, notso well on small, composite aircraft, and not at all with some of the new"stealth" technology. (There’s some debate as to how well it works trackingflying saucers.) Its range is limited by terrain and precipitation. It’s ratherindiscriminite about what it detects: airplanes, trucks, hills, trees. And it only reportsa target’s azimuth and range, not its altitude.

Secondary radar was invented to overcome these limitations. It depends on a"transponder" in the aircraft to respond to interrogations from the groundstation. Depending on the type of interrogation, the transponder sends back anidentification code (Mode A) or altitude information (Mode C).

Transponders are also sometimes referred to as "beacons", and another namefor secondary radar is "ATC Radar Beacon System" or ATCRBS (pronounced"at-crabs").

Today, virtually all ATC radar installations are equipped with both primary andsecondary radar capability. However, the FAA is threatening to decomission primary radarfrom its enroute facilities. If they did this, centers would no longer be able to"see" any aircraft that were not transponder-equipped or whose transponderfailed. Center controllers and pilot groups like AOPA are opposed to this, and it remainsto be seen if anything comes of it. 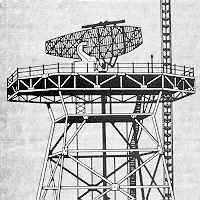 If you take a close look at an ATC radar ground station, you’ll see thatthey actually consist of three separate antennas. The biggest and most obvious one is theprimary radar antenna, which looks like a parabolic dish that goes round and round (10times a minute for approach control radar, 6 times a minute for long-range center radar).This antenna transmits powerful pulses and then listens for echoes. It is used to detectaircraft "skin paint" and also can detect weather to some degree.

The second ground station antenna, called the directional antenna, is used to sendinterrogations to airborne transponders and to receive replies from those transponders,providing secondary radar capability. It is a bar-shaped affair that is usually perchedatop the primary radar antenna and rotates along with it. It’s called"directional" because, like the primary radar antenna, it is designed to beamthe interrogations and to receive the replies only from the direction it is pointed.

When the transponder receives an interrogation, it compares the strength of the threepulses it receives. If the P2 pulse is weaker than the P1 and P3 pulses, then thetransponder knows it’s hearing the main lobe from the directional antenna, and it repliesto the interrogation. On the other hand, if P2 is stronger than P1 and P3, then thetransponder knows it’s hearing a side lobe and so it doesn’t respond. Pretty clever, huh?

The ground station transmits its interrogation pulses on an "uplink"frequency of 1030 Megahertz, and the transponder replies on a "downlink"frequency of 1090 Megahertz. Effective range of secondary radar is usally about 110 miles,although this can vary considerably from one site to another.

The ground station may send a Mode A interrogation to request the transponder code or aMode C interrogation to request the aircraft altitude. The only difference between Mode Aand Mode C interrogations is the time interval between the P1 and P3 pulses. Groundstations normally alternate the two types of interrogations, and send them quickly enoughthat the transponder receives several of each on each sweep of the radar antenna. (Modes Band D are used by the military and in other countries, but are of no concern to most ofus.)

By the way, the transponder’s output power (typically about 200 watts), frequency (1090MHz), and "side lobe supression" logic are among the things that your radio shoptests when you bring in your aircraft for its biennial transponder certification check.These biennial tests are mandated by FAR 91.172, and are required for all aircraft, notjust those that fly IFR.

Transponder codes are four digit numbers with the digits limited to the range0-7. For you computer geeks, it’s a 12-bit number expressed in octal notation…non-geeksmay safely ignore this. If a controller assigns you a code with an 8 or 9 in it, check tosee if it’s April 1st…if not, you might want to call the facility supervisor when youget on the ground and suggest a urinalysis.

All aircraft transponders now must comply with TSO 74b or 74c. If yours doesn’t complyto this TSO then legally you can’t even turn it on VFR. Almost all transponders do complywith this but watch out for old Narco AT-50 King KT-75 units…they might be illegal ifnot properly modified.

Nowadays, most of our transponders have a mode switch with four positionslabelled OFF, STBY, ON and ALT. Some have a fifth position marked TEST. They also have anIDENT button, a reply light, and four code selector switches.

After you start your engine, you should turn your transponder from OFF to STBY. Thisallows it to warm up but won’t permit it to respond to interrogations. If your aircrafthas an avionics master switch, you may safely leave the transponder in STBY and never evenbother to turn it OFF.

When you take the runway for takeoff, turn your transponder to the ALT position, whichenables it to respond to both Mode A and Mode C interrogations. Even if you don’t have analtitude encoder installed, you should operate your transponder in the ALT mode. Thereason for this is that the ground station is still looking for Mode C "framingpulses" from your transponder, even if there’s no altitude information accompanyingthem.

If your altitude encoder malfunctions and starts putting out bogus altitudeinformation, the controller may instruct you to "stop altitude squawk." If hetells you this, you should change your transponder’s mode switch from ALT to ON. Thisenables it to respond to Mode A interrogations but prevents it from responding to Mode Cones. The only time you should ever operate your transponder in the ON (rather than ALT)mode is when ATC specifically instructs you to do so. Furthermore, since the problem mighthave been with the ground equipment instead of yours, you should probably ask the nextcontroller you talk to if you can "squawk altitude" again and have him checkwhether or not it seems to be working.

From time to time, a controller may ask you you to "squawk ident" or simplyto "ident". In this case, you should push the button on the transponder markedIDENT. This should cause the reply lamp to stay full bright for about twenty seconds,after which it resumes its usual spastic flashing…this is normal. When you push theIDENT button, it adds an extra pulse to your replies that causes your target on thecontroller’s radar scope to change appearance. (It either "blooms" on anapproach control radar screen, or has a flashing "ID" on a center radar screen.)Controllers sometimes use this to help find your target, or to make sure the target theythink is you really is.

Most transponders have the capability of having a remotely-mounted IDENT button. Ifyour transponder is hard to reach, you might want to have your radio shop install a remoteIDENT button on your yoke or in another easy-to reach location.

Modern transponders are fairly reliable. They do have a couple of expensive parts,however. In fact, if the main output tube of an older transponder fails, it’s often morecost-effective to install a new solid-state transponder than to fix the old one.

The altitude-reporting capability of your transponder transmits your aircraft’sPRESSURE ALTITUDE (rounded off to the nearest 100 feet) whenever it receives a Mode Cinterrogation and is switched to ALT mode. You might recall from your private pilotgroundschool that pressure altitude is what the altimeter reads if you set it to 29.92 In.Hg. Because the transponder reports pressure altitude, the altimeter setting that you dialinto your altimeter’s Kollsman window has absolutely no effect on your Mode C altitudereports. It is this fact that makes "blind encoders" (which are mounted behindthe panel and have no setting knob at all) practical.

Now you might ask, "if my altimeter is set at 30.23 and the Mode C is putting outaltitude referenced to 29.92, won’t the controller see my altitude incorrectly?" No,because ATC’s ground equipment automatically adjusts your Mode C readout for the localaltimeter setting (which its computer knows about). That’s why it’s important always tomake sure your altimeter is set to the altimeter setting that ATC gives you from time totime. That way, the controller will be seeing the same altitude that you’re seeing.

The transponder depends on an external altitude encoder to provide the digitizedpressure altitude that the transponder needs for its Mode C replies. The encoder isconnected the same static air line as the altimeter and is wired electrically to thetransponder.

The encoder may be either a separate unit ("blind encoder") orintegrated into the aircraft altimeter ("encoding altimeter"). Encodingaltimeters save space and help ensure that the encoder and altimeter agree, but they arefairly expensive.

The regulations say that your encoder and altimeter must be within 125 feet of eachother. If you get too much error, ATC may ask you to "stop altitude squawk". Ifthis happens more than once, it’s time to visit your friendly avionics shop to get thealtimeter and encoder married. I would explain how they are married, but marriage is notby expertise.

The cheaper blind encoders have a solid-state pressure transducer that is used to sensealtitude; more expensive ones and all encoding altimeters use an aneroid type as used in astandard type altimeter. The solid-state transducers tend to lose their calibration withage, which means that frequent adjustments may be needed to keep it within the 125 footcorrespondence limits required by the regs. The aneroid type encoder seldom needsadjustment. What this means is that what you save in the purchase price of a cheapsolid-state encoder will ultimately be offset by higher maintenance costs. I recommend theaneroid type…you can usually install them then forget about them.

What about Mode S?

There’s a new type of transponder called a Mode "S" transponder that isrequired for TCAS and may support datalink. A few years ago, the FAA tried to mandate thatthe fleet retire their Mode A/C transponders and upgrade to Mode S, but this move wasstrongly resisted by AOPA and other general aviation groups. At present, the rules toforce the transition to Mode S have been put on indefinite hold, and aircraft that aren’trequired to be TCAS-equipped (which includes most of our owner-flown airplanes) continueto use the older and far less expensive Mode C units.

The FAA is now talking about a future ATC system based not on radar surveillance, as isused today, but on "automatic dependent surveillance" in which aircraftcontinually transmit their GPS position to ground stations which keep track of them andtell controllers where they are. In view of this, it’s possible that Mode S may becomeobsolete before we need to worry about it.