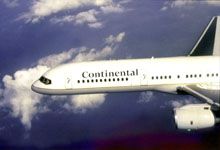 Stephen Brown says he has no intention of abandoning his successful air conditioning business in Albuquerque, but hes done something most private pilots havent. The 47-year-old 182 pilot was asked to take the right seat of a Continental Airlines Boeing 757 after the captain collapsed at the controls (he later died) shortly after takeoff from Houston bound for Puerto Vallarta 10 days ago. Brown, along with his wife and some friends, was among 210 passengers heading on vacation when, less than an hour into the flight, Brown said he knew something was terribly wrong not long after a flight attendant asked if there was a doctor on board. Anyone who could see up front could see them pulling one of the pilots out of the cockpit, Brown told AVweb in an exclusive interview. While a doctor, a nurse and a couple of sports medicine specialists performed CPR on the stricken pilot (the cause of his death has not been released yet) another announcement was made asking if there were any licensed pilots on board. It turns out Brown and one of his friends were. We quickly went up front to see if there was anything we could do to help out, Brown said.

Click here to hear AVweb’s exclusive podcast interview with Stephen Brown about his experience on the Continental flight.