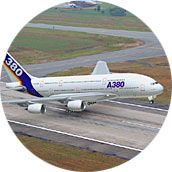 Airbus is downplaying test results in which an A380 wing undergoing static testing failed slightly before the required design limit. The wings are supposed to take 1.5 times the design load limit but this one failed at 1.45 times, about 3.3 percent shy of the certification requirement. Airbus spokeswoman Barbara Kracht said the wing will need some “refinements” but the aircraft is on schedule for certification and first deliveries late this year. “We will need to find out from the data what is really needed but it’s certainly not a redesign of the wing,” Kracht told Associated Press. An A380 recently successfully completed cold-weather testing in northern Canada and the crew threw in some polar navigation tests after the five day stay in Iqaluit, in the northern territory of Nunavut. An A380 in Singapore Airlines, livery is heading to the Asian Aerospace air show in Singapore next week. Singapore Airlines will put the first A380 into service, followed by Emirates and Qantas.