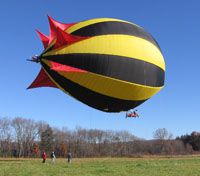 It might not be the perfect vehicle for everyone — and its usefulness is yet to be proved — but for the pilot who yearns to simply launch from the backyard and tool around for fun, the personal hot-air blimp could fit the bill. Dan Nachbar of Amherst, Mass., launched his homebuilt airship for the first time in late October, and recently completed its first 10 hours of test flights. Unlike other hot-air blimps, Nachbar’s design has a rigid internal frame. And unlike helium blimps, it can be deflated and stored between flights, without the need for a hangar. The internal frame also can be folded for storage. “Our team’s mission has been clear — to create a unique aircraft capable of quiet, steerable, safe and affordable flight,” Nachbar said Tuesday. “We have succeeded beyond our wildest imagination.” The blimp, which is 102 feet long and 70 feet in diameter, is capable of slow, low-level flight as well as “turn-on-a-dime” steering, according to Nachbar. And it’s a joy to fly, he claims: “It’s what I imagine it would be to fly like Mary Poppins, cruising through the sky.” Nachbar plans to further develop the prototype aircraft and seek FAA approval to produce the airship for sale. A blimp would probably cost between $100,000 and $200,000 depending on configuration, he said. The ship could prove useful for tasks such as forest canopy research, wetlands survey/management, eco-tourism, aerial photography and filmmaking, among others.