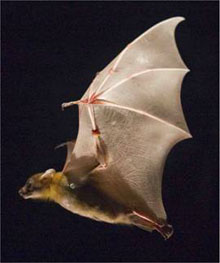 Birds may be prettier, but bats have all the moves when it comes to maneuverability and aerodynamic efficiency, according to a study by Brown University researchers. Using sophisticated video gear, the study team found that while birds can rotate and retract their wings in flight, bats have much more flexibility in the articulating membrane they use for flight and this makes them much more agile. And since agility, flexibility and efficiency are also great qualities in micro-sized UAVs that are proliferating, the Brown team says there are lessons to be learned from bats. “Bats have unique capabilities,” said Kenneth Breuer, an engineering professor at Brown who did the study with Sharon Swartz, an associate professor of ecology and evolutionary biology. “But the goal is not to build something that looks like a bat. We want to understand bat flight and be able to incorporate some of the features of bat flight into an engineered vehicle.” Bat wings are made up of an assortment of articulated joints that allow them to make the most of the energy they expend in flight. The extraordinary flexibility also allows them to perform aerobatics unique to them, like 180-degree turns in the space of less than half a wingspan. The researchers used cameras synchronized from four points of view, lasers and an aerosol mist to record and study the animals’ aeronautical actions. But theres more at play than scientific interest and academic advances. The Air Forces Office of Scientific Research funded the project.