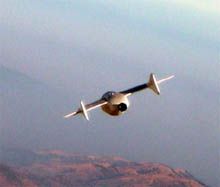 Scaled Composites’ X Prize hopeful, SpaceShipOne, a Burt Rutan design, yesterday achieved ignition of its hybrid rocket motor, driving it to 1.2 Mach and 68,000 feet near Mojave before demonstrating its “feathered” high-drag descent feature. The aircraft reached 48,000 feet with the aid of Scaled’s White Knight turbojet host aircraft, after which the supersonic portion of the flight was achieved by test pilot Brian Binnie, who released from White Knight at 8:15 a.m., ignited the rocket and flew the craft under power in a 60-degree climb, ultimately going vertical to reach zero airspeed at 68,000 feet. The rest of the flight test went well … right up until landing. At 68,000 feet, Binnie reconfigured the aircraft into its high-drag “feathered” re-entry state for a one-minute descent before transitioning for the 12-minute glide back to the Mojave runway. The left landing gear “retracted at touchdown,” causing the ship to depart the left side of the runway. The damage has been estimated as easy to repair and Binnie was unhurt.