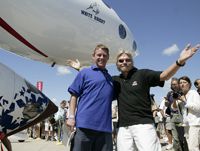 For the first few years of space tourism, suborbital flights will be mainly for the rich, Sir Richard Branson, of Virgin Galactic, told the Oshkosh crowds this week. But that won’t last. “We’ve got to start somewhere,” he said, and today’s plan to sell seats for $200,000 is just the beginning. But while the rest of us have to wait for those prices to fall, one lucky passenger already has his ticket in hand. Doug Ramsburg, 42, of Northglenn, Colo., won an online sweepstakes that ran during the SuperBowl last February. Now, he’s ready to become a space traveler. This is Ramsburg’s first trip to Oshkosh and though he’s has had no real experience with aviation before, “As a kid I always dreamed about going to space,” he said, “and now it’s going to happen.” Ramsburg is a regular guy with a regular staff job at the University of Colorado in Denver. He just bought his first house a couple of years ago, and, yes, it did cost less than the $200,000 price of a ticket to space. But he wouldn’t even consider trying to sell off his ticket. “I think it’s going to be a real spiritual experience,” he said. “I know the risks are very real. But I feel ready to go. Even if I die doing this, I think that would be the most perfect death you could ask for. We all gotta go sometime.” Branson and Rutan are working very hard to make sure he does come back, and you can count us among their supporters.