I admit it: until a few years ago, I found Civil War history tiresome; there weretoo many battles, too many deposed Union generals, and too many politicalfacts to master. Now, midway through my fifth decade, I have the patience,the curiosity and the time to try to understand something of this mosttroublesome episode in our American experience. But nothing makes historycome to life quite so much as a battlefield visit. Where to start?

In the Northeast, one of the most accessible battlefields is also oneof the most famous. Gettysburg is about 180 nm. from the New York metropolitanarea, and about 35 nm. southwest of Harrisburg, the state capital of Pennsylvania.

Flying in to Gettysburg 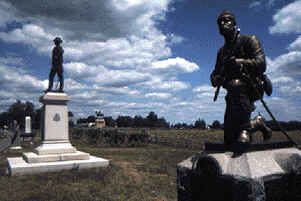 In a way, time has stood still at Doersom Airport (W09). Although notquite antebellum, the airport has been in the family of its present owner,Donald E. Doersom, for 70 years. Without government support, the owners(justifiably, I would argue) charge a nominal $6 fee for landing and parking.Mr. and Mrs. Doersom live on the premises, pump the avgas, do the repairs,give the airport advisories on Unicom, and run the taxi service.

Doersom has a single narrow (40′) paved 3,096′ runway (06/24), reasonablyflat, obstacle-free and in good condition, but no instrument approach andno lighting. (The nearest airport with an instrument approach is CarrollCounty, MD [W54], about 18 nm. away). Doersom is 209°/29.2 DME fromthe HAR VOR, and open most of the year. According to Mrs. Doersom,the aerodrome closes in the winter months and is then appropriately NOTAMed.On a busy day in the autumn, which is the "big" season there,they’ll have 12 to 15 aircraft arrivals, she says (on a perfect Saturdayin early September, we were the only customers). Parking is on the grassnear the FBO. Mr. Doersom meets you at the pump, arranges your rental caror bus tour, gives you directions, and is generally as helpful as possible.100LL was $2.20/gal. (including tax) at the date of this writing.

There are two excellent ways to get to the center of the action, theNational Park Service Visitors Center: rental car, and Mrs. Doersom’s car.

Probably the best way to see Gettysburg is with a rental car, becauseit permits easy access to numerous sites, a personalized guided tour froma licensed battlefield guide ($25), and opportunities visits to interestingplaces that are not close to the battlefield. Economy Car Rentals (717-334-8485)will meet you at the field if you call to reserve.

But for a mere $11 (for both drop-off and pickup), Mrs. Doersomwill drive you to the few miles to the Visitors Center and pick you uplater.

With a car, it is possible to follow the self-guided auto tour, youcan easily drive around the battlefield in two or three hours. At mostof the numbered stops, markers describe significant action during the threedays of battle. Auto tours conducted for a fee by licensed battlefieldguides begin at the Visitor Center.

What To See and Do 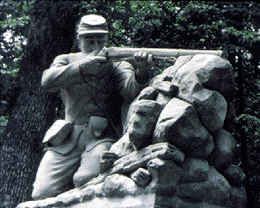 From either car or taxi, walking the battlefield, as thousands of soldiersonce did, can be very exciting. The High Water Mark Trail (about a mile)begins at the Cyclorama Center, showing regimental monuments, part of anartillery battery, the ground defended by Union soldiers in repulsing Pickett’scharge, and General Meade’s headquarters. There are three longer trailsused by the Boy Scouts for the Heritage Trails program.

Park Rangers lead walks, give talks, and present programs at variouslocations on the battlefield to help you visualize the personal impactof past events. The Visitor Center and Gettysburg Museum of the Civil Warhas orientation displays, Civil War exhibits, current schedules of range-conductedprograms, and the Electric Map presentation that shows, through the useof colored lights, troop movements during the battle. Admission ($2) ischarged for the map program.

The highlight of my trip was a 45-minute walking tour of the NationalCemetery by Park Ranger Randy I. Cleaver. It helped fill in some gaps inmy knowledge of the political situation of 1863 and really made me thinklong and hard about why the North just didn’t let the South go.

The Cyclorama Center has exhibits, a ten-minute film, "From TheseHonored Dead," and the Gettysburg Cyclorama, a painting by Paul Philippoteauxof Pickett’s Charge displayed with a sound-and-light program inside a largecircular auditorium. Both the film and the Cyclorama program are presentedregularly; admission ($2) is charged only for the Cyclorama program.

From the Visitors Center, you can also take a shuttle bus to the EisenhowerNational Historic Site, the only place Ike and Mamie ever called home.Also, if you’re hungry, you don’t have to go far — McDonalds, Hardees,KFC and Howard Johnson are across the street from the cemetery, in unseemlyproximity to this sacred site.

The Battle of Gettysburg — A Refresher 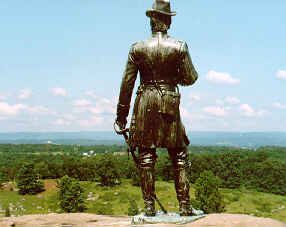 In spring of 1863, the Confederacy found itself in a situation thatcalled for action. The Confederate Army of Northern Virginia, commandedby General Robert E. Lee, had defeated the Union forces at Fredericksburgin December, 1862, and again at Chancellorsville in May, 1863; but thenature of that ground gave Lee little opportunity to follow up his advantage.Thus Lee began moving his army north in early June, hoping to draw hisenemy to a better battleground and hoping to find desperately needed suppliesin the rich Pennsylvania farmlands, which up until then had been untouchedby the War. Lee also reasoned that one or more decisive victories in theNorth would increase pressure on the Northern government to seek a peaceagreement with the South. Thus, Lee and his army pushed their way intoPennsylvania during June and eventually converged in Chambersburg, about30 miles west of Gettysburg.

BothGeneral Lee and General George Gordon Meade, commander of the Union Armyof the Potomac, had chosen different areas in which to engage the other’sarmy. But chance brought the two forces together at Gettysburg on July1, 1863. This first day’s battle was a definite, but indecisive victoryfor the Confederates. They came with greater numbers initially from thewest and the north, pushing the Union forces back through town. The disorganizedUnion troops retreated but regrouped on the high ground south of town —on Cemetery Hill, Cemetery Ridge, Little Round Top, and Culp’s Hill —and formed a defensive line shaped like a fishhook.

On July 2, theConfederates struck both ends of the Union line. They hit hard, first atLittle Round Top and then at Culp’s Hill and Cemetery Hill; but with highground and craggy rock formations in their favor, the Union troops heldout against these attacks. On July 3, General Lee again attacked the Unionforces. But this time Lee struck at the center of the Union line sincethe fighting on the previous day demonstrated the strength of the Unionflanks. In this massive attack, now popularly known as Pickett’s Charge,the Confederates lashed out at the Union troops on Cemetery Ridge. Butthe Union Soldiers held once again and pushed the Confederates back totheir original position on Seminary Ridge.

The Battle of Gettysburg was over.

The broken remnants of the Confederate army retreated back to Virginia.The three-day battle left a staggering toll of 51,000 casualties (wounded,killed, missing, or captured) divided nearly equally between the two armies.The Confederates never again reached the military strength that they heldat Gettysburg, yet the war raged for two more long years. 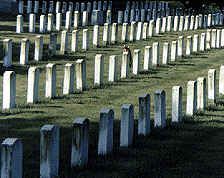 To me, the most interesting events at Gettysburg occurred after thebattle. Immediately after the battle, Pennsylvania Governor Andrew Curtinvisited the battlefield, ostensibly to see with his own eyes the closestreaches of the Civil War into northern territory. He was appalled at whathe saw: thousands of fermenting bodies, with gas-distended bellies, deliquescingin the July heat. Curtin charged David Wills, a local lawyer, with cleaningup the horrible aftermath of the battle: wounded soldiers crammed intoevery available building, and thousands of swollen dead strewn among hundredsof bloated dead horses. With the approval of Governor Curtin and the eighteenstates whose sons were among the dead, Wills quickly acquired seventeenacres for the national cemetery and had the Germantown landscape architect,William Saunders, draw up a plan. Burial began not long after.

Henry Wadsworth Longfellow, William Cullen Bryant and John GreenleafWhittier — the three most notable poets of the time — all declined to attendthe dedication ceremony. On September 23, Wills invited the venerable EdwardEverett, the nation’s foremost rhetorician, to give an oration at the dedicationceremony planned for October 23. (Everett had been an editor, ambassador,president of Harvard, Secretary of State and a U.S. Senator — in short,one of the most distinguished men in America, who could hold audiencesspellbound with his speeches of two hours or more.) Everett accepted, but,needing more time to prepare, persuaded Wills to postpone the ceremonyto November 19. 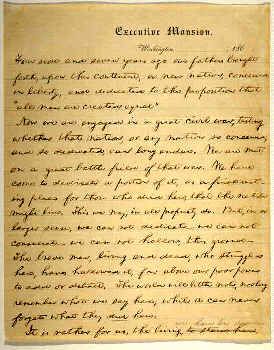 On November 2, 1863, now several months after the battle (July 1-3)and six weeks after the invitation to Everett, Wills invited PresidentLincoln to make a "few appropriate remarks" at the consecrationof a cemetery for the Union war dead.

Although Wills wrote his invitation to Lincoln only three weeks priorto the dedication — prompting speculation among historians about his andGovernor Curtin’s motivations — there is evidence that Lincoln was fullyapprised of the affair in early October.

Lincoln accepted the invitation, obviously viewing it as an appropriatetime to honor all those who had given their lives in the Civil War. Hemay also have seen the dedication as an opportunity to reveal his evolvingthinking about the War, as a fight not only to save the Union, but alsoto establish freedom and equality for all under the law. His speech wascarefully prepared (contrary to customary fiction, and not written on theback of an envelope), and it contained one noteworthy mistake when Lincolnintoned, "The world will little note, nor long remember what we sayhere." The ideas of freedom and nationhood are central to thespeech Lincoln gave at Gettysburg, which, despite its brevity, as opposedto Edward Everett’s long-forgotten two-hour oration, has become one ofthe most memorable of all time.