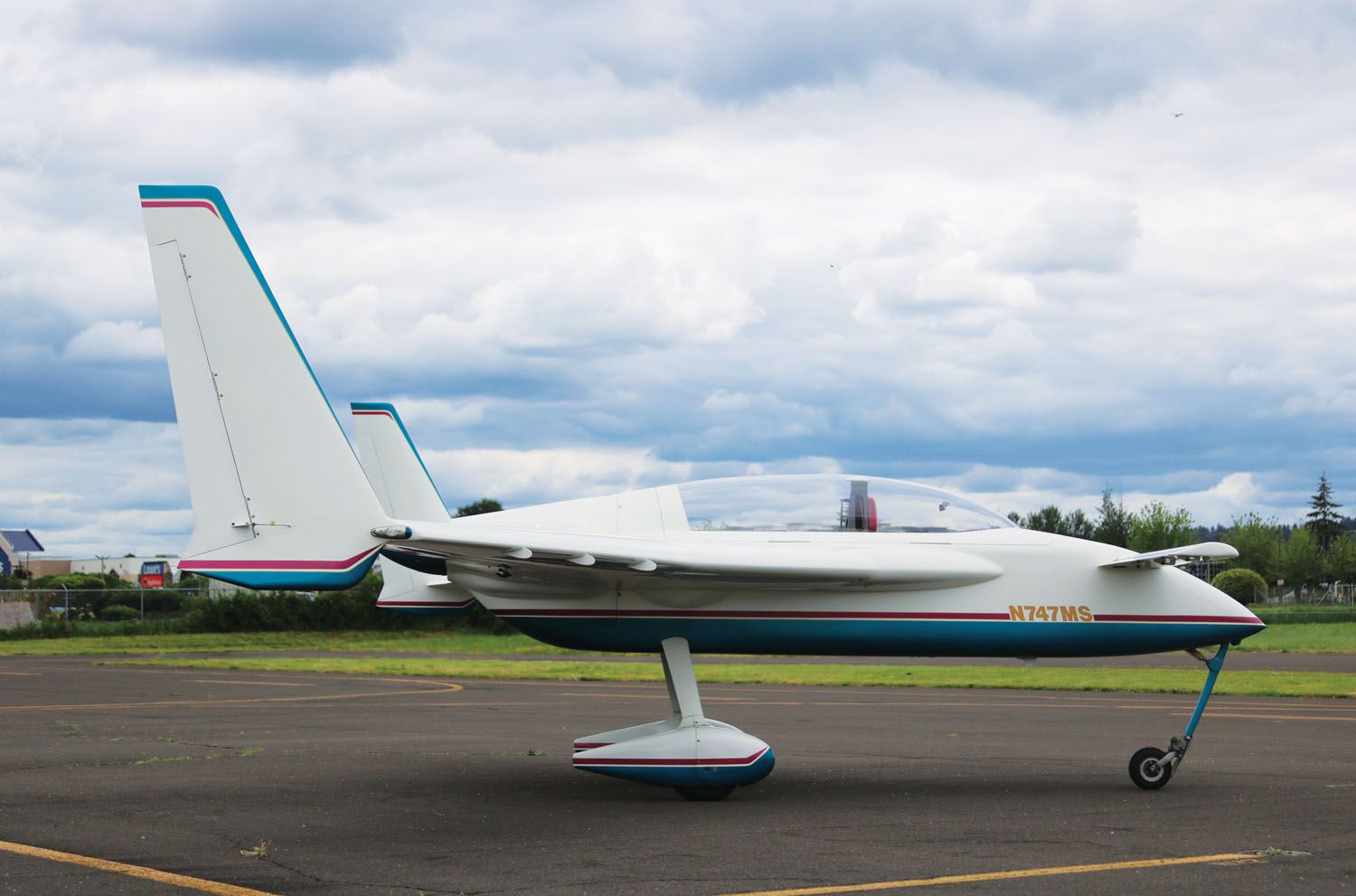 Burt Rutan wasn’t the first to build and fly a pusher-type airplane with the tail in front, but he did solve the inherent weaknesses in the concept, flaws that had bedeviled the similar WW-II era Curtiss XP-55 Ascender fighter plane. Rutan’s strength as a designer has always been to find innovative ways to successfully achieve a performance objective or limitation. For instance, when it was evident that the CG of an empty VariEze would cause the powerplant-heavy aft fuselage to drop to the ground, his solution was to make the nosewheel retractable. By cranking it up after disembarking, thereby parking the aircraft in a self-chocking, prayerful position, the awkward storage problem was solved.

Designed around a Lycoming O-235 engine, the Long-EZ not only had a longer, sleeker fuselage but a larger main wing with less sweep angle. The wing-root strakes were bigger, giving more space for fuel and baggage, and the cockpit was wider. With 52 gallons of fuel, the Long-EZ could stay aloft for as much as 10 hours. The easiest way to discern the two EZs is to look at the wingtip; VariEzes have short protuberances below the wingtips, under the tip rudders, something not usually present on the Long-EZ.

Prefabricated kits for easy assembly were never part of the Rutan Aircraft Factory’s offerings. Plans and instructions were simply sold by RAF, and a bill-of-materials package was offered by major homebuilt supply houses. Thus, the builder is responsible for most all of the work seen in a Long-EZ offered for sale, and it is important to have a knowledgeable EZ builder/owner to help evaluate a purchase.

As with the VariEze, the Long-EZ uses Rutan’s moldless foam-core construction method, a brilliant, simple way to optimize shape by cutting or hot-wiring out a profile from blocks of high-density poly foam, sanding it to exact dimensions and laying on fiberglass and epoxy over the foam, as is done with surfboards. The result is a light, sleek airframe, giving very efficient aerodynamics.

The forward lifting surface, incorporating pitch control, means trim drag is minimized compared to conventional aft-tail aircraft. Stability is also enhanced, providing pleasant cross-country cruise characteristics, and EZs are essentially stall and spin resistant, nodding gently straight ahead when flown at the canard’s critical angle of attack. The trade-offs, of course, are the limitations imposed by a pusher engine installation and tailless configuration. Rutan solved stability problems by installing winglets (tip sails) with independently actuating rudders on the end of the swept wings. The rudders can also be deflected simultaneously, acting as air brakes, by depressing both rudder pedals at once. Because of the intentionally imposed limited lifting ability of the canard, required so the main wing cannot ever be stalled in flight, slowing the sleek EZ down for a landing requires deflection of a bellyboard drag surface. Flaps are not available because trailing-edge lift/drag devices would upset the carefully crafted balance between main wing and canard.

What to Look For

Because Long-EZs were not assembled from factory-built kits, even though many prefabricated components were available from supply houses in the heyday, it pays to have experienced eyes look over your temptation before you succumb to its charms.

Terry Schubert, retired newsletter editor of the Central States Association (the CSA is now part of the Canard Owners and Builders Association as it had become much more than a regional group), gave us a lot of tips about EZ evaluation. He says to carefully consider the empty weight; excessive weight can’t be fixed. Added poundage impacts performance and it compromises the G-load safety margin. He says an O-235 powered Long-EZ ought to come in at 850 pounds, without a starter, and he wouldn’t consider one that weighs 1000 pounds as it would be a single-place plane most of the time. One with an O-320 engine ought to weigh less than 1050 pounds.

Then look the airplane over in good light, but not in glaring sunshine that hides imperfections. Look for rounded bulges in the finish that might indicate a delamination of glass from the foam core, which can only get worse under flight loads. With the nose gear retracted, stand at the rear and observe the underside of both wings; the amount of exposed areas visible should match, and if they don’t there may be an issue with one side’s angle of incidence. There should be no bare glass on surfaces exposed to sunlight, which invites UV damage. Paint should not be coming loose, which is probably a result of poor priming and may need removal and recontouring to fix. EZs are better off painted white or very pale yellow due to the room-temperature cure construction; heat soaked up by dark colors weakens the structure.

Schubert cautions against buying any airplane that has been operated on alcohol-based fuel, which attacks the tanks in the strakes. Watch for blisters and soft lumps in the tank structure, which are challenging to repair. A later mod changed the system from two vent lines to four; if there’s more than 15 gallons in a tank with the original vents, there will be venting of fuel overboard from expansion while parked nose down. The solution is to fuel up just before departure. The Long-EZ’s direct-reading sight gauges are unfailing indicators of fuel level.

The control system should be checked for flutter-inducing looseness, including the rudder return springs, and the elevators need to be noted as having been balanced in the logbook. There should not be any trim tabs added to the elevators or other controls if properly built. The rudders come in two sizes, partial and full length; the later are termed “high performance” rudders.

Canard style is a debate among knowledgeable and not-so-knowledgeable EZ “experts.” The original Long-EZ plans called for the same GU25-5(11)8 canard airfoil that was used on the VariEze, which could exhibit some pitch-down trim change if flown in rain and required a few extra knots for takeoff and approach if rain was present. In 1985, plans for a canard with a John Roncz R1145MS airfoil were introduced, which largely eliminated the trim change. Some Long-EZs have vortex generators added to the upper surface as an alternate fix. As Schubert points out, some of the original canards may not have been well contoured and therefore have no laminar flow to be disrupted by rain, thus exhibiting none of the pitch-down tendency.

If in pursuit of maximum performance, a Long-EZ builder will have opted for a Lycoming O-320, or even an O-360 for another 12 pounds of weight. Because the airplane was designed for the lighter O-235, the bigger engine and associated systems require some attention to CG and perhaps weight savings in other areas. Just make sure the airplane under consideration hasn’t had the bigger engine installed without documenting the change in the logs and limitations.

If sticking with the O-235 for lightness and economy, while still enjoying impressive speed, some builders leave off the starter and install a lightweight wood propeller. There’s certainly nothing wrong with flying at 160 knots on 115 hp, although the climb rate will be slower than with an O-320.

Many Long-EZ builders have tried automotive engine conversions, including Mazda rotaries, and two-time builder Bob Holliston cautions against considering one, saying that they are four times as much trouble and are almost never successful. Stick with the tried-and-true airplane motors.

Long-EZs are wonderful cross-country traveling machines, albeit somewhat snug and limited on storage space; using moldable soft luggage stuffed in the strakes is the key. They are stable and have long legs, burning less fuel for the distance than just about any other two-seat airplane. Forward visibility, particularly on approach, is obviously impacted by the canard.

If you’re looking for short-field and unimproved airport capability, you’ll want to buy something else. The airplane’s small tires, relatively high liftoff and touchdown speeds, and the possibility of FOD damage to the pusher propeller do not lend EZs to STOL operation. Their strength is in efficient transportation.

The characteristic praying-mantis tie-down position means you will begin by lifting the nose and reaching inside to crank the nose gear down. It takes 8.6 turns to extend the gear over center and lock it in place; watch for the nose to rise and then dip slightly at the end of the cycle, indicating that the gear did go over center. Hold on and climb aboard to add the human ballast; hopefully, there will be a boarding step installed.

If you haven’t hand-propped the engine before boarding, check and announce for a clear prop to the rear before cranking up. Canopy latching is critical; there should be a warning system to alert you to an unlatched canopy before takeoff. By the same token, the full bubble makes a great greenhouse in hot weather, so you’ll want to leave it cracked for taxiing. Brakes, of course, are necessary for steering, so check them early and often.

Once the engine runup and the sidestick and rudder controls are verified, recheck the canopy latching and swing into position to launch. When the canard comes to life and the nose can lift off, gain another 10 mph and the main wing will break ground. The canard makes a great attitude reference for climbout. Climbing doesn’t take long, with 1500 fpm rates with small engines and 2000 fpm or more with the bigger Lycomings. For best efficiency, get the EZ up to 10,000 feet msl where it does its finest work. For the O-235 engine expect to see 150 to 160 knots TAS at normal flight levels and upwards of 200 knots with O-320/O-360 installations.

Descent planning starts well out from the destination; the sleek Long-EZ doesn’t want to come down and slow down. There should be a nose gear-up warning to get your attention with the power back. Extend the belly board for the approach and keep a sharp eye out for lower and slower airplanes ahead. The touchdown comes at 65 mph or so as the main wing quits flying, and then it’s time to get on the brakes for slowing and steering.

Disembarking is the reverse of mounting; an occupant in the rear seat simplifies the urgency of lowering the nose to prevent a tip-up. A postflight inspection of the rear-mounted engine compartment is a good idea, since you’re not walking past it at the nose.

The Rutan Aircraft Factory ceased operation in 2004. Plans remain available in unused and partially used state from former builders, so there are still some new Long-EZs being added to the 700 or so registered in the U.S. Support is found among the membership of the Canard Owners and Builders Association, Squadron III, and the Rutan Aircraft Flying Experience (RAFE) organization website. TERF Inc. has secured the rights to publish all former RAF materials for the guidance of owners and builders.

Photos: Marc Cook and courtesy of the Long-EZ owners.