The folks atMoffett Fieldlocated in Sunnyvale, California, musthave a thing about building things BIG. If you have ever overflown Moffettor driven past it on the Bayshore Freeway, you won’t forget the size of thehuge Navy blimp hangars. The largest was built to house theairship "Macon" and would swallow a whole squadron of P-3swithout any effort. During Moffett’s annual open house, they usedto give hot air balloon rides inside the hangar!

NASA also has a big presence at Moffett called the Ames Research Center,and they also have the "build-it-big" disease.You might have seen pictures of their main wind tunnelwhich is the largest in the world. It has two testsections: the smaller is 40 by 80 feet and the larger is 80by 120 feet. And, yes, this does allow them to stick anentire airplane inside and turn on the fans…all six ofthem!

But NASA Ames also has another monster that most peoplehave never heard of, but which is really worth seeing.This is the Vertical Motion Simulator(VMS) and it is the largest three dimensional motion simulator inthe world.

You’ve probably seen pictures of the full-motion flightsimulators that the airlines and high-end flight training companies use.FlightSafety International and American Airlines routinely feature them intheir ads.They consist of a simulated airplane cockpit sitting on a platformwhich is itself supported by a number of hydraulic pistons tomove the whole thing around. A few cables come out the sideto connect the simulated cockpit up to the computers locatednear by. Stick a pilot in the cabin, fire up the computers,add a fiendish instructor, and you can emerge at theend of an hour dripping with sweat. (And presumably a muchmore proficient pilot!)

Well, the VMS is just like one of these that has beentaking steroids — lots of them. Picture a big empty buildingthat is 120 ft. high, 73 ft. wide and 36 ft. deep. Put yoursimulated cockpit inside this big empty space and let it moveanywhere it wants to. Oh yes, don’t forget to add somehydraulics to make it pitch, rotate and yaw at the same timethat it is moving around inside the building. That’s the VMS. 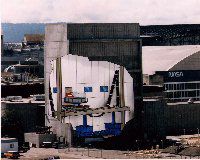 The mechanical pieces to make this all work arequite amazing. The main platform is moved vertically by twolarge pistons which extend 75 ft. deep into the floor belowthe VMS. These pistons support a large horizontal platform.On this platform is a carriage that can move from side toside across the entire building. Finally on top of all thisis a structure that looks basically like the simulator wehave seen in the pictures — an enclosed room that looks likean airplane cockpit once you get inside. In addition, thereis a large cable assembly supplying power and moving computersignals between the simulated cockpit and the rest of thebuilding. This entire complex is big and heavy — the motionsystem plus payload total about 140,000 pounds

Although the motions of the system are normally fairlyrestrained since it is used to simulate the movements of areal aircraft, the system is capable of some truly impressiveaction. During tours, the operators seem to like to show offtheir toy by putting it into a mode where it moves from theuppermost left-hand corner down to the lowermost right-handcorner as rapidly as possible. Then it quickly moves back towhere it started.

Visitors usually wind up in open-mouthed amazement that somethingso big can move so fast. Folks with sensitive stomachs look awaybecause just watching the thing can tumble your gyros. Those withmore intestinal fortitude look to their tour guide and ask rathersheepishly "is anyone in there?"

(The answer is "No" for both humanitarian and safety reasons.)

Obviously, a piece of equipment like this represents ahuge investment and you would like to keep it as busy aspossible. NASA has taken an interesting approach to thisproblem: they’ve built a number of quick-change cockpit enclosuresthat NASA calls ICABs (Interchangeable Cabs). Four ICABsexist, and are configured to simulate different types of aircraftsuch as fighters, helicopters, transports and the SpaceShuttle.

At any given time, one ICAB will be mounted in theVMS doing research and one or more of the remaining ICABswill be sitting on the ground nearby being configured for thenext research project. In this way, the actual motionsimulator is used as much as possible and each newly-configuredICAB can be largely checked out on the ground. Thus the onlylost time is that used to dismount the old ICAB and mount thenew one.

The ICABs are all similar but differ in the numberof windows, configuration of the controls, instruments, etc.since they have to be able to represent a wide variety ofcurrent and planned aircraft.

As you might imagine, this whole affair is driven by alarge number of computers. Computers control the obviousthings like how the whole thing is moving around, what thepilot sees out the window, and what the instruments areshowing. But they also drive some less obvious things such ashow the controls feel (remember they’re not connected toanything real), generating sounds and vibrations to simulatea real aircraft, and driving experimental gear such as aHUD (heads up display).The computers used to support the VMS range from somewhich are a bit long in the tooth to the very latest wondersfrom Silicon Graphics.

One of the things that I foundinteresting is that the VMS features old fashioned computerrooms. You remember the kind — glass walls to keep the riffraff out, raised floors to hide all the cables, lots of airconditioning ducts in the ceiling. But the computer room Isaw seemed to be empty. Lots of empty floor space with a fewboxes that were several feet high seemingly arranged in arather random pattern. The boxes looked about right to siton. Then I realized those tiny little boxes were thecomputers that were making all the magic happen. It was thebest demonstration I have ever seen of how fast computershave progressed in the last twenty years. Especially when youconsider how many more times powerful those tiny boxes arethan the computers that used to fill up the entire room notso many years ago.

The purpose of all this hardware is research. Tests areperformed on a wide range of problems. One of the mostinteresting uses of the VMS is to simulate the Space Shuttle.The VMS has databases to support the simulation of the SpaceShuttle landing at Kennedy Space Center as well as Edwards,Zaragosa, Banjul, Ben Gurier, Dakar and Moron. Watching oversomeone’s shoulder while they try to land the shuttle at theCape gives a very good feel for just how quickly thingshappen and how small the margin for error would be if thepilot wasn’t paying attention. The ability of the VMS tosimulate alternate landing sites is a big plus because that’sobviously something a shuttle pilot — flying the world’s mostexpensive glider — will have to get right the first time!

NASA offers tours of the VMS, the wind tunnels, and several otherfascinating aviation goodies that they have at Ames. Call ahead toschedule your tour, and be sure to tell them you’d like to seethe VMS.