The 16th Annual Piper Fly-in, known as "Sentimental Journey," took place last week at the birthplace of thousands of Piper aircraft — Lock Haven, Pa. In spite of off-and-on rain throughout the four-day event, over 135 planes managed to arrive at the W.T. Piper Memorial Airport (LHV) from June 20-23, while another 500 or so pilots and Piper aficionados drove to Lock Haven so as not to miss the planes and surrounding activities. Many of the attendees camped under the wings of their aircraft or on the airport grounds. Sentimental Journey attendees showed off restored Pipers, participated in aviation seminars, renewed friendships, or just relaxed in the beautiful mountains of central Pennsylvania throughout the four days. And when the rains came and closed the lush grass runway that was the center of flying activities, pilots could visit the nearby Piper Aviation Museum to learn the history of various Piper models from the fabric-and-tube Cubs to the all-metal Cheyennes. The museum is located in the engineering building next to the old Piper factory, where thousands of Pipers were built from 1937 until the factory permanently closed in 1984.

The heavy rains that soaked the fly-in grounds on Saturday reminded some of the locals of the great flood of June 23, 1972, when the nearby Susquehanna River overflowed its banks and enveloped not only the airport but also the Piper factory, destroying dozens of just-completed airplanes and numerous others in various stages of construction. But it would take much heavier rains than that to stop the fly-in these days — a dike has been built around the airport to keep out the river. 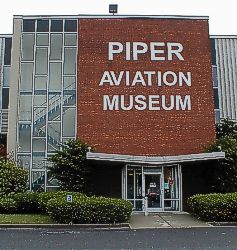 Volunteer John Buchan, one of over 200 volunteers — many of whom are former Piper employees — who make the Sentimental Journey happen, said the bad weather greatly reduced the number of aircraft attending this year. Although the fly-in is open to any and all types of planes, the majority of aircraft attending the fly-in are classic Pipers such as Cubs, Vagabonds and Pacers — airplanes with basic instrumentation designed for fair-weather flying. However, a Cub pilot from California managed to make it in earlier in the week before the weather went sour, after flying 40 leisurely hours from the left coast. There were also numerous pilots who flew in from Canada, and several folks from as far away as Hawaii and England, but they didn’t get to Lock Haven in a Cub.

Among the unique Pipers at this year’s Sentimental Journey was the PA-12 Super Cruiser "City of the Angels." Along with its sister ship, "City of Washington," the two PA-12s became the first light aircraft to fly around the world in 1947. Though the "City of Washington" is owned by the Smithsonian Air & Space Museum in Washington, D.C., and will never fly again, "City of Angels" was completely restored to full flight status by Dave Liebegott of Clearfield, Pa., in 1998 after some 1,500 hours of work. Owned by Harry Mutter of Media, Pa., the PA-12 is based and displayed at the Piper museum, but flown regularly. According to Mutter, "The ‘City of the Angels’ is no hanger queen, as we’ve put over 300 flight hours on her since the restoration was completed. Many of those hours include flying through Canada to retrace all the routes and stops made in that country during the original around the world flight." Another interesting tidbit that Mutter likes to mention is that the "City of the Angels" is technically the first light aircraft to circumnavigate the globe, as it was first to land at the flight’s termination in Teterboro, N.J., just minutes ahead of the "City of Washington."

Though most of the older Pipers at Sentimental Journey were not as famous as the "City of the Angels," that doesn’t mean they are loved any less by their pilots. As the fly-in wound down late Saturday afternoon, the rain finally stopped and the sun broke through the clouds. Then followed a cool, calm summer evening, with the sun dipping towards the surrounding mountain tops — a perfect time to fly a Cub.

Numerous pilots released the tiedowns holding their beloved Cubs and took to the skies for short hops around the patch. Soon there were numerous Cubs in the pattern, doors wide open — the best way to fly a Cub in the summer — giving rides, or just trying to get one more fun flight in before the sun set. One by one they slipped their Cub down on final, straightening out just before the wheels lightly kissed the still-wet grass. The smiles on their faces, young and old, showed they each were completing their own sentimental journey.

It was just as it should be, and just as the company’s founder, W.T. Piper Sr., would have wanted.

Click on any image to view a larger version