I think many of us in the Northeast are looking for relativelyshort trips that can be flown in three hours or less — and TangierIsland neatly fits that description.

US Sprint’s TV commercials in spring of ’95 gave tons of freepublicity to Tangier Island, an isolated fishing community inthe middle of Chesapeake Bay. The commercial was right on themoney. The island natives still talk with the accent of theirforebears from Cornwall.

Over the years, we flew past the island many times while transitingV1 between New Jersey, North Carolina and Florida but I must creditour visit to Alton K. Marsh, who penned a delightful article inthe August 1994 issue of AOPA Pilot magazine. Mr. Marsh’spiece covered most of the Maryland eastern shore.

Late last winter, tired of shooting approaches to Sullivan County,Orange County and other relatively nearby airports, my right-seater,Roger Soderman and I set out on a practice IFR flight headed forTangier. Our arrival over the Cape Charles VOR was cannily timedfor lunch. It was mid-week and there was only one other planeon the ramp.

Our walk from the airport into the village took all of four minutes.Well, maybe five minutes.

Since we had come here to eat, we picked one of two restaurantsat the center of town for the obligatory crabcake sandwich. Onthe way out, I (fortuitously as it turned out) grabbed a coupleof brochures describing two local Bed & Breakfast operations. Also purchased – a tee-shirt for my wife, Sally.

Since she now had the tee-shirt and had never been to Tangier,this was the perfect excuse (1) to make the trip and (2) to fly!We called ahead to both B&B’s. Yikes! It was the middle oftourist season and the first one we phoned, Shirley’s Bay ViewInn (804 891-2396) was full. No problem, though, because The SunsetInn (804 891-2535) had vacancies. Both B&B’s charge $60 percouple in season (children under 12 free) and provide air conditioningand cable TV.

So, on a lovely day in early August we got a "cleared asfiled" from the tower at our home base of Caldwell, New Jersey,and we were on our way. Tangier is less than two hours flyingtime from CDW. The IFR routing we got was CDW..DIXIE.V1.CCV..TGI. 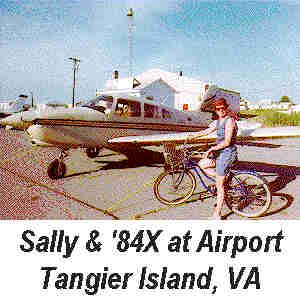 Welanded at Tangier Island airport, paid the $4.00 landing fee,and phoned the B&B. The nice lady from the Sunset Inn cameto retrieve us in a golf cart! The "streets" on TangierIsland are so narrow that the most common mode of transportationis bicycle, followed by moped, followed by golf cart.

The trip was remarkably brief and when we pulled up at the SunsetInn…surprise! Our room was no more than 300 feet from the southend of the runway! The Sunset Inn gave us a map showing a stylizedversion of the island with colorful place names such as TaterBay, Big Gut Canal and Job’s Cove.

We walked into town to see the lady who rents bicycles. "Two-dollarsper hour," she said, "or five dollars indefinitely."We paid for "indefinitely" and pedaled off to adventure.

The first item on the agenda was to visit the five gift shops.Only five? Hey, this is no sprawling metropolis. You can bikeall over the island in an hour or so!

We pedaled north to the yacht basin, then south through a numberof residential areas. At one cottage, we saw a yard filledwith literally hundreds of mallard ducks. They were all free tofly away but chose not to…they knew a good deal when they foundone. As we watched, the ducks went bonkers, quacking, runningand fluttering toward a corner in the fence. We thought we hadspooked them, but halfway down the block, a middle aged chap walkedtoward the cottage, chuckling. "Are they waiting for you,"we asked. "Yep, I feed ’em," he said.

Tangier Island has five restaurants. For lunch that day, we chosethe one in the "downtown" area that Roger and I didn’ttry on our previous visit. We ate…yep, crabcakes! After lunch,we donned bathing suits and pedaled down a road that got narrowerand narrower until it turned into a sandy path that ended at thebeach. There was not another soul in sight. We had the place toourselves.

Tangier’s economy is based on crabbing and oyster dredging. Itis further enriched, every morning, by dozens of cash-bearingtourists who arrive via ferry from Reedyville, Virginia (19 milesto the west) and Crisfield, Maryland, on the DelMarVa peninsula(12 miles to the east). Most of the tourists return to the mainlandwhen the ferry boats depart at 4:30PM. If you listen carefully,you can hear the sidewalks roll up. There is no movie house. Thereis no bar. If staying at one of the B&B’s, you can watch TVor read magazines. You did come here to relax, didn’t you?

For dinner, we pedaled to Hilda Crockett’s Chesapeake House B&B(804 891-2331) and found, as Alton Marsh described it, a boarding-house-styledining room. The last seating was 5pm and we sat at long tablesset with platters of ham, corn pudding, applesauce and hot rolls.

Alton Marsh was right, again. We got two crabcakes, max.The dinner crowd included some folks who were staying at variousB&B’s and two Maryland couples who had cruised to Tangieraboard a sailboat that was berthed at the marina.

When dinner was over, it was only 6:30, the sun was still highin the sky, but all the stores were closed… except for a coupleof vendors who offered ice cream! A perfect dessert!

We retired to the B&B, cranked up the air conditioning, andwatched the evening news. Just before dusk, we walked to the bighouse next door and climbed to the second floor deck to watchthe sunset.

Next morning, we went next door to the big house for the Breakfastpart of the B&B contract and, after scrambled eggs and toast,the lady with the golf cart gave us a ride back to the airportramp. If we absolutely had to, we could have just walked acrossthe back yard to the south end of the runway and hiked (probablyillegally) to the north end. On departure, we headed east towardV1, while staying low enough to remain clear of the floor of R-4006.

All in all, a great trip. If you are interested in a visit toTangier, be advised that some facilities are seasonal and limittheir hours from mid-October to April. Call ahead, and happy flying!