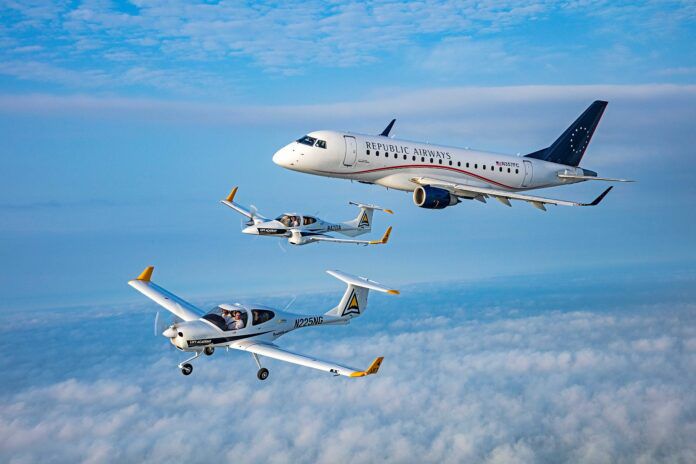 The FAA has denied a Republic Airways petition for an exemption from regulations requiring pilots applying for an airline transport pilot (ATP) certificate to have logged 1,500 flight hours. In the petition, the airline asked that graduates from its Leadership in Flight Training Academy (LIFT) be allowed to apply for a restricted airline transport pilot (R-ATP) certificate—allowing them to serve as first officer in Part 121 operations—with the same reduced experience requirements as military or former military pilots, who may apply for an R-ATP with 750 hours total flight time. Republic argued that its proposed R-ATP Program would “exceed the safety standards of the military R-ATP” as well as making “airline pilot career opportunities more accessible for qualified individuals from underrepresented groups.”

“After full consideration of Republic’s petition for exemption and the public comments, the FAA has determined that the relief requested is not in the public interest and would adversely affect safety,” the agency stated in its decision. “The FAA finds that the supporting materials and LIFT historical data does not sufficiently support Republic’s claim that the Republic R-ATP Program is sufficiently comparable to the training program of a military branch to warrant a reduction in flight hours.”

Republic also argued in its petition, which was filed last April, that its proposed program would provide a service to the public by producing more pilots to satisfy “continuing commercial aviation demand,” including benefiting “small communities who rely on commercial aviation services.” The FAA disagreed that granting the exemption would address any pilot shortages, noting that “the exemption process is not the avenue to address the hiring difficulties of an operator that may result in service cuts to particular areas.” The “1,500-hour rule” was adopted by the FAA at the direction of Congress following the 2009 crash of a Colgan Air Flight 3407.