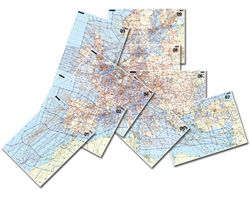 Popular aviation charts vendor Air Chart Systems has sent a notice to its subscribers that it’s ceasing publication of the spiral-bound paper atlases that were its signature product for more than 50 years. In a note attached to the March 7 electronic update of en route charts and approach plates, the company suggests it’s out of the paper charts business. “Due to adverse business conditions and the increasing use of electronic charts, we will not be publishing our atlases or renewing next cycle,” the note reads. The company says it will no longer mail hard copy updates either. The company has not responded to our repeated attempts to contact them for clarification of the note.

The Air Chart Systems website is still live. Air Charts Systems published its various VFR and IFR atlases every May and issued updates on the FAA schedule. Cumulative updates went in a pocket in the appropriate atlas and the FAA considered that sufficient for chart currency purposes. Air Charts was launched by Howie Keefe, who saw a business in repackaging government charts, including approach plates and en route and sectional charts. The charts were provided in spiral-bound atlases and Air Charts periodically sent paper revisions, but not entire new charts. Keefe sold Air Charts, but then started another similar system called Tri-Nav.