The earth’s surface is about 71 percent water. Most of us will never pilot a personal aircraft long distances over oceans, but eventually flying over some body of water while beyond gliding distance to land is almost a certainty. When we do that in a single-engine aircraft, the adverse consequences of an engine failure increase dramatically, even if the likelihood of that same failure remains the same. And even multi-engine aircraft have been forced to ditch, so an extra powerplant won’t always get you home.

It’s popular to dismiss the additional risks of ditching by noting that the chances of an engine or systems failure forcing a landing in water are just as great when over land. Since we tell ourselves the likelihood of such an event is minimal, we also tell ourselves it’s okay not to carry a raft or personal flotation devices (PFDs). Whether we’re over the Gulf of Mexico, coming back from Catalina Island or on the way to Oshkosh, we need to at least think about how we fly over water.

On May 12, 2019, the pilot of a Beechcraft V35 Bonanza reported engine problems over Lake Michigan and declared an emergency. Soon, radar and radio contact were lost, at about 1950 local time. The piston single had been receiving VFR flight following services from ATC while en route from Ontonagon, Mich., to Monroe, Mich. Publicly available aircraft tracking data show the airplane proceeding direct to its destination at 7000 feet MSL, taking it in a southeasterly direction, almost exactly from the upper left corner of Michigan to the lower right, and over Lake Michigan.

The total planned distance was 389 nm, with some 55 nm of it—14.1 percent—over Lake Michigan. At its 163-knot groundspeed, the Bonanza’s pilot could plan on being over water for a mere 20 minutes, only a portion of which was beyond gliding distance from land. But that’s when the engine apparently failed.

While ATC had been notified of the emergency, exactly where the aircraft went down wasn’t known. Further complicating rescue, water temperatures were about 40 degrees F, and the sun was setting. There apparently was no signal received from an emergency locator transmitter (ELT), and the occupants presumably had no survival gear aboard.

Using robotic underwater vehicles with sonar and video capabilities, the Michigan State Police located the Bonanza on May 22, in about 515 feet of water some 4.5 miles off the coast near Franklin, Mich. The body of one of the two men aboard was found nearby in late May.

Most of us think of a forced ditching as very unlikely unless we’re over an ocean or one of the Great Lakes. However, winding up in a small lake, river or even a large pond is very possible, especially at night or in bad weather conditions. While pilots of multi-engine aircraft discount the possibility having to ditch, engine failure is not the only situation forcing it upon us, with or without power.

While the advent of GPS has changed some of the ways we do flight planning and operate the flight, we definitely should take a look at a chart to minimize overwater risk that may add just a few minutes to our planned flight. If he had done so, the Bonanza’s pilot may have altered the planned direct flight over water for a shorter water crossing, reducing the overwater portion and perhaps putting the plane closer to an airport when the engine trouble occurred.

Consider the weather conditions, and especially the forecast winds, plus alternate airports. Determine a point of no return—past which the better choice is to continue, otherwise turn around—just in case you have a problem. Plan for more fuel than the bare-minimum 45- or 30-minute fuel reserve.

Another thing to plan for is what you’ll do if there’s a critical systems failure other than the engine. What would you do if you suffered an electrical failure, or a vacuum-driven gyro failed during your overwater venture? Depending on the engine and other equipment, either could be a sign of impending engine failure. Would you continue, divert or turn around and go back to where you came from? Why?

There’s no federal regulation requiring any kind of survival equipment for private piston-powered aircraft not operated for hire (FAR 91.205). When thinking about equipping for a forced ditching, the most important items to facilitate survival until you and your passengers can be rescued are personal flotation devices (PFDs) for each person, a personal locator beacon (PLB) and, ideally, a life raft.

Water temperatures in the Great Lakes, as well as most coastal areas of the Pacific Ocean and Atlantic Ocean, for the most part are chilly even in the summer. Unless you are in the Gulf of Mexico or Florida coastal waters in the summer, the cold will rob your body heat, and you’ll have limited time before total exhaustion or unconsciousness if you don’t get out of the water.

In the case of the Bonanza ditching into Lake Michigan, with water temperature around 40 degrees F, the time to exhaustion/loss of consciousness would be as few as 30 minutes, with possibly less time until one is unable to swim or tread water. The name of the game here is to survive long enough to be rescued, not recovered, and 30 to 60 minutes is not enough time.

When it comes to selecting a PFD or raft, one feature you probably should avoid is any kind of automatic activation. Water-activated PFDs and rafts can inflate prematurely and impede your exit from the plane. Seconds can count in a sinking plane. Small children require the assistance of an adult with a special flotation device designed to keep a child’s upper torso above water, as they may not be strong enough to hold their head up out of the water and could drown. Life rafts aren’t likely to be part of the equipment carried when only infrequent overwater jaunts are anticipated. They’re relatively heavy and bulky, and need to be placed near the cabin door for egress. But they can be important since they keep you out of direct contact with the cold water. Carefully select an aviation life raft as quality, size and weight make all the difference in usefulness in a light aircraft ditching. Additional items you should have access to, and sometimes are included in a raft, include a pyrotechnic signaling device, whistle, signaling mirror and portable strobe light.

The third item is a PLB. While an ELT may be on board the airplane, unless you triggered it manually, it might not go off in a successful ditching. Another problem is the ELT won’t be able to transmit for long, since it’s going to sink with the airplane. So a PLB on your person and/or in a raft will continue providing location information. This is important, as the raft you are in will most likely drift away from where the aircraft landed, and you could be miles away by the time a SAR team came looking for you.

The newer 406 MHz ELTs provide a lot of information even if the satellite only gets a few hits; one equipped with GPS can pinpoint your location to within meters. Even if you have a perfectly good 121.5 MHz ELT, we think the latest technology 406 MHz ELTs, with their combination of attractive pricing and features make the upgrade a no-brainer. The 121.5 MHz ELT signal has not been monitored by satellite in 10 years. It’s time to proactively stick the fork in that 1970s-era technology.

Carrying a current-technology PLB replaces the ELT that just sank out from under you, and can offer the same basic feature set as a 406 MHz ELT.

Flying across open water demands greater attention to detail, starting with the pre-takeoff checklist Take a good look at the mag drop—is it within limits? Be honest with yourself. Once in cruise, verify you can draw fuel from all the fuel tanks. Before going “feet wet,” take another look at the engine instruments and vacuum system to be sure everything is working. If something isn’t working, would you turn back or continue? Give this some thought, as each situation is different.

The name of the game here is to minimize the risk and, while the plane may fly fine without gyros or an alternator, you may lose control of the situation and should another problem arise, you are at much greater risk.

What if something happens, and you’re faced with ditching? What should you do? Fly the plane, of course, but where will you go? Do you know where you are and what is nearby? Are you in contact with ATC and can you report your problem to them? Squawking 7700 is important, as is a Mayday call on 121.5 and activating your ELT. You need to be able to communicate your position.

If you are trying to make the most of your altitude, maintain the best glide speed, close the cowl flaps, position the propeller control to low rpm or the feather position. This will help ensure you get the maximum distance out of a glide and may make the difference of landing in the water versus landing on land. If you have done everything possible following recommended procedures, you could be rescued in short order depending on the weather and where you land.

A water landing off Florida with all the boat/vessel traffic, Coast Guard, Customs/Border Patrol and good communications could mean a reasonably quick rescue. But ditching into one of the Great Lakes in bad weather or at night could mean you might be looking at an overnight in your raft. It will help your survival odds if you have a raft, or at least a PFD, and have thought through all the things that need to happen to pull this off. Above all, choose an altitude maximizing your chances to reach land.

If you must land in water, never land in the face of a wave; land on top or on the back side of a wave into the wind if possible. Maintain control of the plane until touchdown and, above all, do not stall the plane. Be prepared for a quick exit.

Help others get out, especially those injured. After inflating the PFDs, get everyone into the raft and accounted for. Activate your PLB. Do not attempt to swim to shore unless it is very close, as currents can be very strong and with cold water, you may become exhausted quickly.

Stay in a group and use any means to help SAR teams visually identify you. It is extremely difficult to find a human in the water, especially if there is a lot of wave action or at night.

I’ve crossed Lake Michigan in a single-engine airplane on my way to or from Oshkosh more times than I can count, including once at night. Some thoughts:

Spend some extra time on preflighting your aircraft before heading off over water:

Mike Berry is a 17,000-hour airline transport pilot, is type rated in the B727 and B757, and holds an A&P ticket with inspection authorization.

This article originally appeared in the July 2019 issue of Aviation Safety magazine. 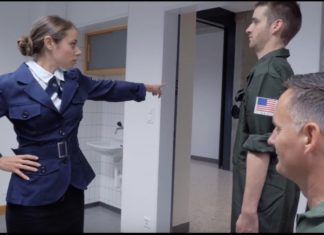