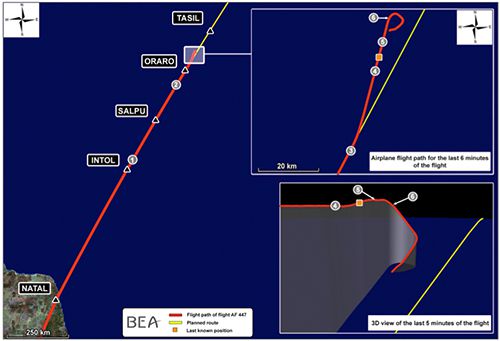 The pilots of Air France Flight 447 flew the aircraft into deep stall at 38,000 feet, never verbally acknowledged or corrected that condition, and the aircraft fell for more than three minutes at nearly 11,000 feet per minute into the Atlantic, killing all aboard, investigators said Friday. The jet maintained a nose up attitude — along with an angle of attack greater than 35 degrees — throughout a descent rate that translates to more than 122 miles per hour of vertical drop. “At no point” on the cockpit voice recorder “is the word stall ever mentioned,” Chief Investigator Alain Bouillard said in an interview. The autopilot and auto-throttle disengaged and the pilots recognized failure of the Airbus A330’s speed sensors. The pilots took manual control and the aircraft climbed. A stall warning sounded as the jet ascended rapidly from 35,000 to 37,500 feet and by 38,000 feet three stall warnings had activated. Less than two minutes after the autopilot disconnected, the aircraft was at approximately 35,000 feet, with full takeoff thrust selected; the angle of attack had exceeded 40 degrees and jet was falling at about -10,000 ft/min.

The captain was not present in the cockpit as the incident began. The flight deck crew was flying at night over the ocean near storms where they expected turbulence. What they faced was an aircraft that suddenly disengaged both the autopilot and auto-throttles, and cockpit displays that delivered mismatched and rapidly changing airspeed values that ranged from at least 275 to 60 knots. Within seconds, the non-flying pilot stated, “So we’ve lost the speeds.” Then he said, “Alternate law.” Those two words mean, among other things, that the aircraft’s angle-of-attack protections have been shut down. Before the captain entered the cockpit, the pitch and angle of attack of Flight 447 had both reached 16 degrees as it was hand-flown. The horizontal stabilizer had passed from 3 to about 13 degrees nose-up. The throttles had been set at full takeoff thrust and the aircraft had stalled. It was less than two minutes since the autopilot had disengaged.

As the captain entered the cockpit, the aircraft’s systems received airspeed values they deemed invalid, leading the airplane’s systems to automatically shut off the stall warnings. The aircraft was still in full stall with the nose up, falling at -10,000 ft/min. Almost one minute into the stall, the pilots reduced engine thrust and temporarily made nose-down inputs that were not enough to break the stall. As the jet continued to fall, it rolled at times up to 40 degrees and turned more than 180 degrees to the right. Data shows that the pilot flying held the sidestick at the full left and nose-up stops for the entirety of one 30-second span, and that the airliner remained stalled until impact.

There were as many as three pilots in the cockpit through the majority of the descent. The pilot flying as the event unfolded was the least experienced of the crew, with 3,000 hours of flight time. He was right-seat at the time. The flight’s captain had almost 11,000 hours of experience. He was not in the cockpit as the incident began. The cockpit crew attempted to call him to the flight deck several times during the first minute after the airspeed sensors failed. He joined them less than two minutes after the autopilot disconnected. A second pilot, flying left seat, was given the controls in the flight’s final minute. Aside from that information, BEA, the investigating agency, did not publish any cockpit conversation that took place during the last minute of the flight.

The aircraft impacted the water at 16.2 degrees nose-up with a roll angle of 5.3 degrees to the left. The aircraft heading was 270 degrees (nearly opposite the planned route of flight) and the ground speed was 107 knots. The last recorded vertical speed was -10,912 ft/min.